For other variants, see SCAR-L and MR23.

scar_h_thermal_silencer (Version found in The Only Easy Day... was Yesterday and Just Like Old Times, wielded by Captain Price for the latter and can be given by console)

The SCAR-H is commonly used by the U.S. Army Rangers, and is one of the weapons in the starting loadout for "Wolverines!" and "Exodus".

It can be scavenged from dead friendlies or found at specific points in the American campaign. It can be found with or without various attachments, depending on the situation including: a Foregrip (in "S.S.D.D."), a Red Dot Sight combined with the Shotgun (in "Wolverines!"), as well as a standalone Red Dot Sight, ACOG Scope, M203 Grenade Launcher, and a Thermal Scope. Furthermore, in "Exodus" it has a laser targeting sight, which is used to paint targets for the Stryker Armored Vehicle "Honey Badger" to engage.

The SCAR-H is also a starting weapon for the Task Force 141 in "The Only Easy Day... Was Yesterday" and can also be found in the mission "Loose Ends" dropped by allies and "Just Like Old Times", with a Thermal Scope or underbarrel attachment (Shotgun or Grenade Launcher).

The SCAR-H is unlocked at level 8, and combined with its high damage and low recoil it is a popular weapon. Its main drawback is its low magazine capacity. It also has a slower reload compared to the other Assault Rifles, making Sleight of Hand or Extended Mags useful in mitigating the common reloads.

At close range, the SCAR-H will kill in three hits without Stopping Power, and two with the perk. At long range it kills in four hits, or three with the perk selected. Stopping Power is useful due to the weapon's slow rate of fire compared to most automatic weapons.

The SCAR-H also features what most consider very simple iron sights, which give a clear, uncluttered view, meaning that sight attachments are not commonly used.

In Hardcore, the SCAR-H is a one-shot-kill at any range, unless shooting upon enemies using Painkiller, Last or Final Stand, or at targets behind cover. This somewhat negates the need for extra ammo, making Sleight of Hand a useful alternative as the SCAR-H has a fairly long reload time in comparison to other assault rifles. It is also, due to its low recoil, useful with an ACOG Scope, as it has no sway, along with fully automatic fire.

The SCAR-H does not work well with Reload Cancelling as the animation stops a very short period of time after ammunition is added, making Sleight of Hand useful, although low ammo becomes a problem. Using both Scavenger Pro along with Extended Magazines mitigate its low reserve ammunition and magazine capacity.

The SCAR-H is the starting weapon in the Special Ops missions Homeland Security, Body Count, and Wardriving. It is an alternate weapon in The Pit, Snatch and Grab, Overwatch as well as Suspension. Enemies in Snatch and Grab carry it.

The SCAR-H in first-person 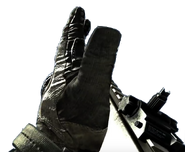 Third-person view of the SCAR-H with a foregrip in "S.S.D.D."
Add a photo to this gallery

The SCAR-H returns in Call of Duty: Black Ops II in both the campaign and multiplayer, sporting a new look. It now has a black finish, unlike the beige appearance seen in Modern Warfare 2. Other than the new look, the SCAR-H retains similar high-damage and long-range stats to its predecessor. It also appears for the first time in Zombies Mode.

The SCAR-H is unlocked at level 40 in multiplayer. It draws its feel and characteristics strongly from the Call of Duty: Modern Warfare 2 version. This accounts for the SCAR-H having a moderately slow rate of fire, manageable, yet slightly off-putting recoil and high damage. The SCAR-H will kill in three bullets out to an exceptionally long range, and four bullets afterwards as of January 26, 2013's patch. Headshot multipliers have been modified so that the SCAR-H will always kill in three headshots at long range, and two within its three shot kill range.

On account of these characteristics, the SCAR-H is best suited for medium range combat. It will be able to deal with long range encounters, although at these ranges semi automatic firing may be required since the recoil is high enough to throw off aim. To counter the high recoil, firing in bursts of two shots can be highly effective when engaging targets at longer ranges. The SCAR-H is arguably weaker at close quarters where the relatively low rate of fire will put it at a significant disadvantage to submachine guns and shotguns. The weak close quarters capability can be rectified with Laser Sight to increase hip fire accuracy, Fast Mag to reduce vulnerable time while reloading, or the Quickdraw Handle to decrease ADS time. Even though the SCAR-H has a moderate reload time, Fast Mags is not essential due to the weapon's impressive reload cancel time. Because of this, skilled players can simply reload cancel and free up an attachment slot for another attachment. Extended Clip may also be useful to provide large amounts of suppressive fire, as well as extra ammunition. At medium range, any combination of attachments can be used; however, the use of a sight is rather questionable since the SCAR-H's iron sights are very open and clear, to such an extent that a Reflex Sight or EOTech Sight is more likely to obstruct the target at long range more than the actual iron sights. On top of this, several sight options for the SCAR-H can be a bit of a burden; several sights are lower than the iron sights. This results in the flash of the rifle possibly hindering visibility. The Suppressor is a good attachment as the SCAR-H's three-hit-kill range is extremely long, although it will incur a very slight recoil increase. With a colossal range and unmatched damage in comparison to other fully automatic assault rifles, the SCAR-H can easily fill a support role of a Light Machine Gun when paired with Extended Clip, and does not suffer from low mobility or a lengthy reload compared to light machine guns, but doesn't have the magazine capacity to support extremely prolonged fire. Paired with Lightweight, the player can use their newly found mobility and ammo capacity increase to quickly get to a defensible position early on in the game and suppress enemies and/or provide covering fire for teammates. Interestingly, the burst of the Select Fire can actually be used very well to the SCAR-H's playstyle, as it can severely cut down the recoil if used in controllable bursts, though it is less optimal at close-range or wherever more than three bullets are needed (unless precise firing patterns are used) than full-auto.

The main advantage of the SCAR-H is its very high damage range profile. On a majority of maps a player should expect most, if not all engagaments to be within this weapon's three-shot-kill range even with a suppressor, a trait not shared by any non-semi automatic assault rifle. This, combined with a 1.2 headshot multiplier, means that its slower rate of fire can be balanced out by a consistent time-to-kill and a two-shot-kill potential out to long range. However, the SCAR-H fares poorly at closer engagements, as it has the slowest rate of fire of any fully automatic Assault Rifle; and even though it has a very high damage profile at these ranges still, faster firing assault rifles such as the AN-94 or the MTAR will beat it out, as they also possess the same amount of power at this range combined with a much higher rate of fire.

The January 26, 2013 patch reduced the idle sway of all assault rifles. The SCAR-H got a buff to its three-shot-kill range by approximately 14%, as well as a minimum damage buff to 33 from 24, ensuring a maximum four-shot-kill at long range (down from five previously).

The SCAR-H can be obtained from the Mystery Box in the Zombies map Origins, and its upgraded variant is one of the possible rewards for one of the Rituals of the Ancients. It sports extremely high damage, retaining a one bullet headshot kill until Round 9, and a two bullet headshot kill afterwards until Round 13. Double Tap Root Beer makes the SCAR-H extremely effective until around round 23, as the doubled damage synergizes well with its high damage per bullet and speeds up its rather slow fire rate for a faster time to kill, although this can also result in an increased recoil so burst fire is recommended to reduce the possibility of recoil.

When Pack-a-Punched, it becomes the Agarthan Reaper and can obtain a Reflex Sight, ACOG Scope, Fast Mag, Fore Grip or Target Finder through further upgrading. Like most assault rifles, it gains a generous increase in damage, magazine and ammo capacity, making it a worthwhile weapon to use into the higher rounds.

It should also be noted that the Agarthan Reaper deals an extreme amount of damage to the Panzer Soldat, and the player can kill one within a matter of seconds if aiming for the head.

The SCAR-H's appearance in first-person 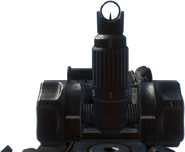 Third person view of the SCAR-H that is equipped with Grip and Laser Sight.
Add a photo to this gallery

The SCAR-H appears in Call of Duty Online as the MK17-CQC.

The MK17-CQC in first person

Aiming down the sight of the MK17-CQC

The SCAR-H returns in Call of Duty: Modern Warfare as the FN Scar 17.

Retrieved from "https://callofduty.fandom.com/wiki/SCAR-H?oldid=2499215"
Community content is available under CC-BY-SA unless otherwise noted.