For other variants, see SCAR-H and HAMR.

The SCAR-L (or SCAR-Light) is the player's default weapon during most part of the campaign, and it cannot be traded out, except on some missions where it's replaced by a sniper rifle. Because of the Arcade nature of the game, the weapon is fairly weak, often taking almost one magazine to take out one enemy, but this is balanced by making the "reload" faster.

The SCAR-L seen in the player's HUD (top-left)

The SCAR-L is used by Simon "Ghost" Riley with an M68 sight and a foregrip.

"Accurate, mobile, and among the highest damage dealing assault rifles, the SCAR-L competes for the top spot in aggressive, mid-range combat. Its low rate of fire helps conserve ammo through sustained bursts, but can cause problems in close range skirmishes against rapid-fire weapons."
— Call of Duty: Elite description

The SCAR-L makes a campaign appearance in the mission "Bag and Drag" with an ACOG Scope, along with an USP .45 and rarely used by Delta Force and U.S. Army Rangers in the mission "Goalpost". It can also be seen inside Makarov's fortress where It can be picked up from the Ultanationalists and the Inner Circle.

The SCAR-L is unlocked at level 6.

The SCAR-L is a low damage-per-bullet Assault Rifle. Before the damage dropoff, three hit kills can be achieved. But almost as soon as damage starts to drop off, it will become a four hit kill, and then the minimum damage becomes a five hit kill. The range of the SCAR-L is rather decent, retaining three hit kills until about 25 meters. The ROF is a moderate 759 RPM. While it won't be the weapon's defining feature, the damage output of the SCAR-L is acceptable.

Accuracy of the SCAR-L is very good. The iron sights are very clear, and recoil is a mild upwards pull. This more or less obviates the need for optical attachments or the Kick Proficiency.

Handling traits of the SCAR-L are relatively moderate. Mobility is on par with other Assault Rifles (barring the FAD), the hip-fire cone is somewhat large, and the reload time is very swift if reload cancelling is done correctly. The SCAR-L has a 30 round magazine, and does not deplete it at a high rate, but is faster than the slower-firing Assault Rifles.

Due to this weapon's strengths, classes should be made to take advantage of them. For example, since the SCAR-L reload cancels so effectively, Sleight of Hand is not needed, allowing for another Blue perk to be chosen. As well, the recoil is minimal, so Kick isn't as effective, and allows another proficiency to be taken in its place. The SCAR-L's precise iron sights nullify usefulness from optical attachments, so players can opt out for a modification, such as a Silencer or Extended Mags.

In conclusion, the SCAR-L is a forgiving weapon that won't be taken down easily. However, its strengths aren't as apparent compared to other Assault Rifles, but the SCAR-L's main strength is that it has next to no weaknesses, barring a lower than average damage per bullet. A player with an accurate shot may not prefer this weapon over one that has more lethality, whereas a player that would want extra accuracy would gladly welcome the SCAR-L into their arsenal.

Due to early unlock times, the SCAR-L is commonly compared to the M4A1 for which Assault Rifle to start off with. The SCAR-L has advantages due to its clearer iron sights, more predictable recoil, a slightly faster reload time, and a longer three-hit kill range. The M4A1 has an advantage due to it dealing higher damage at close range due to higher bullet damage and a slightly higher ROF, and only having slightly more recoil, and only a slightly slower reload time. Thus, the M4A1 is better suited to close range encounters, while the SCAR-L makes for a good general-purpose weapon for use at all ranges.

The SCAR-L is available for both Survival and Mission modes.

The SCAR-L is used by the player providing overwatch in the Mission Mode challenge Invisible Threat, and a starting weapon in the missions Little Bros, Server Crash, and Light 'Em Up (with Extended Mags in the latter). It is also found in mission Vertigo and is an alternate weapon in Fatal Extraction. It is also used by the Inner Circle in Light 'Em Up.

The SCAR-L is available in Survival Mode at level 5 and costs $3000.

The SCAR-L is a popular choice for early and later stages of gameplay, due to its moderate damage, clear iron sights, and low recoil. Stopping power and ammunition may be a problem in later waves, though, especially because it is not carried by any enemy type, which prevents the scavenging of free ammunition from fallen foes.

When used in conjunction with the Sleight of Hand perk, which is unlocked at level 50, reloading becomes almost instantaneous. This makes the weapon particularly useful in later waves when the player can be easily swarmed by dogs, heavy commandos, etc..

First person view of the SCAR-L.

The SCAR-L in third person with an ACOG Scope.

The SCAR-L in third-person.

A French GIGN operator, running with his SCAR-L.

The SCAR-L is featured in Call of Duty: Modern Warfare 3: Defiance as the "SCAR". It has a standard 30 round magazine with 150 rounds to carry, with decent iron sights and fire rate. It is also permanently equipped with an arctic camouflage and can only be found leaning on vehicles, walls and ammo crates; it is never seen used by enemy forces

The SCAR-L in Modern Warfare 3: Defiance. 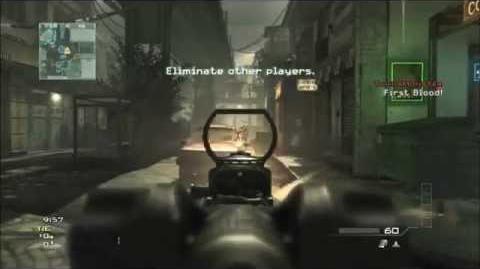 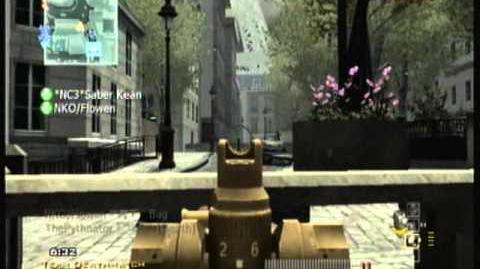