"You are cleared for contact."
— SEAL Team Six announcer when beginning match.

The United States Naval Special Warfare Development Group, often shortened to DEVGRU and informally referred to as SEAL Team Six[1] is a counter-terrorism unit under the jurisdiction of the US Navy with its members drawn from U.S. Navy SEALs members.

SEAL Team Six was part of the U.S. military assault on the Middle East, and was involved in the attack on the country's capital city, where Opfor military leader Al-Asad was believed to be located. During the level "Shock and Awe", SEAL Team Six detected and confirmed a nuclear device at the center of the city, and notified U.S. field command, which dispatched NEST teams to neutralize the warhead. However, they were unsuccessful, and the nuclear warhead detonated with substantial casualties to U.S. military forces. Because the SEAL Team Six were the ones who discovered the device, it can be assumed that they were in the vicinity of the nuke when it detonated and that they were killed.

SEAL Team Six makes another appearance in Call of Duty: Black Ops II. They face the Militia on Turbine, Mercs on Downhill, Hijacked, Standoff, Encore, Frost, and Nuketown 2025, and SDC on Cargo, Carrier, Drone, Mirage, Magma, Uplink, and Pod. Harper, Salazar, and David Mason are stated to be members of the unit.

SEAL Team Six makes brief appearance in the campaign level, 'Demon Within'. After The Player interfaces Sarah Hall's DNI and enters her subconscious, several corpses of SEAL Team Six members can be seen lying on the fourth tree.

The Shotgunner and Assault variants from Call of Duty: Black Ops II make an appearance as default characters in Call Of Duty: Mobile while the Sniper variant can be obtained from a 7 day log in streak. In the Battle Pass comics, pair of Assault units assist Ghost and Tank in an attack on Hackney Yard. A few of them assist Mara in attacking Alcatraz. Two of them attempt to intervene when Templar ambushes Soap and Price but are quickly disposed of.

QQ9, used by the two SEALs in Ghost and Tank's team.

M16, used by the SEALs in Mara's team and Price and Soap's team. 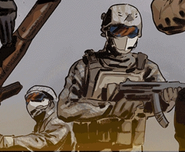 Two Navy Seals behind Ghost and Tank in the Battle Pass Comic. 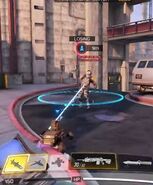 A Spec Ops 3 being stunned by a Shock RC on the Meltdown multiplayer map.

A Spec Ops 5 being stunned by a Shock RC on the Meltdown multiplayer map.

A team of SEALs fight against a gang of what is assumed to be Cordis Die loyalists.

Templar sneaking up on two SEALs.