The SOPMOD (Special Operations Peculiar MODification) is the collective term for a set of attachments used primarily for the M4A1, usually containing a Red Dot Sight, an AN/PEQ-2A laser module, a silencer and a M203 grenade launcher. The SOPMOD in-game is used by the Special Air Service, Task Force 141, and rarely by the U.S. Army Rangers.

The M4A1 SOPMOD variant is used throughout the Special Air Service (SAS) campaign of Call of Duty 4: Modern Warfare, utilizing a Red Dot Sight, an AN/PEQ-2A laser module, a silencer and an M203. The SOPMOD is used in the missions Blackout, Safehouse, Ultimatum, All In and No Fighting In The War Room.

Using the console command give all on the level Ultimatum, an M4A1 SOPMOD without the Red Dot Sight may be obtained. This is a SOPMOD variant used by NPCs.

In Call of Duty: Modern Warfare 2, the SOPMOD version of the M4A1 appears once, in the starting loadout of the mission The Only Easy Day... Was Yesterday, though later the silencer is detached, and thus the "SOPMOD" designation is removed from the HUD. The difference compared to the Call of Duty 4: Modern Warfare equivalent is that it lacks the AN/PEQ-2A laser sight. 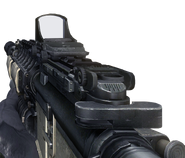