The Tokarev SVT40 is a Soviet semi-automatic rifle, which is a medium between the American M1A1 Carbine and M1 Garand. It is essentially the same as the Gewehr 43, dealing one-shot kills in close quarters or to the head, or three-shot kills to the chest. It has a fairly low rate of fire, but is pretty accurate with a decent-sized magazine and high damage, making it a very effective medium range weapon. Its ammo can become fairly scarce at some points, however.

The SVT-40 is similar to the Gewehr 43, more accurate and powerful than the M1A1 Carbine, but with slightly less ammo than the latter. It is not as powerful as the M1 Garand, but with more ammo and slightly faster semi-auto firing. 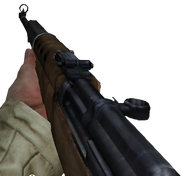 First-person view of the SVT-40

The SVT-40 reappears in Call of Duty 2 where it has very manageable recoil, making it much easier to get a bead on a target after firing. The iron sights are much more open, giving the player some breathing room while trying to find a target and make accurate shots. It has the accuracy and damage, two to three chest shots or one headshot for a kill, of its Call of Duty: United Offensive counterpart. Those changes make the Call of Duty 2 SVT-40 a very good rifle, although its ammo can get to be fairly scarce.

This rifle is the same as the G43. It is a two-shot headshot kill or three shots otherwise. It has a decent magazine size and firecap, and therefore is best reserved for medium to long range combat. 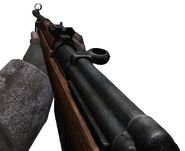 First-person view of the SVT-40.

The weapon is available in the later stages of the Soviet campaign missions. The SVT-40 is the starting weapon in the missions "Heart of the Reich" and "Downfall". It is used by some Soviet troops (the weapon replaces the Mosin-Nagant in "Heart of the Reich" but in "Downfall" the Mosin-Nagant is still present) while other Soviet troops will use the PPSh-41 extensively along with the SVT-40 as the Mosin-Nagant is less common. It is a good weapon to use as a player with a quick trigger finger can easily get the upper hand even against groups of enemy soldiers.

This semi-automatic rifle is obtained at level 1, and is almost statistically identical to the Gewehr 43, in every way, except for available attachments and reload time. Most players prefer the Gewehr 43 for its clearer (albeit less precise) iron sights, slightly faster reload, less intrusive recoil animation, the ability to equip the Rifle Grenade attachment, and the ability to equip a Suppressor over the slightly louder Flash Hider. However, when using the Telescopic Sight the SVT-40 does not have its front iron sight blocking a part of the scope as the Gewehr 43 does, making it a good alternative to a sniper rifle or a counter-sniper's weapon. The SVT-40 is also unlocked earlier than the Gewehr 43.

The Flash Hider attachment works very well on this gun, as it allows a clearer view for follow-up shots, without significantly affecting the range. Damage-wise, both the SVT-40 and Gewehr 43 are almost statistically identical to the M1A1 Carbine, with the only differences being available attachments, reload time, and magazine capacity.

In Hardcore game modes, the SVT-40 can kill in one shot, regardless of where the enemy is hit.

The Bayonet was also going to be available to the SVT-40, but was cut.

The SVT-40 in first-person. 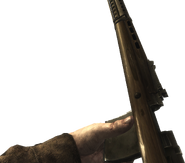 Red Army
The SVT-40 only appears in multiplayer, available only for the Russian faction; it is semi-automatic and has a 10-round magazine. It has the same damage of the Walther G41 with a slightly slower reload compensated by clearer iron sights and less muzzle flash, helping the engagement at longer ranges. It deals high damage, capable of taking out enemies in two shots at close ranges and it is a one-hit kill at the head even at medium ranges, and has overall good hip fire accuracy. It also has no firecap, meaning that a player with fast fingers can shoot the SVT-40 even faster than some automatic weapons: this makes the SVT-40 an excellent weapon for all ranges, though it is often discarded for its semi-automatic nature.

The SVT-40 returns in Call of Duty: WWII and is unlocked by entering Prestige 1 with the Infantry Division. It shares many similarities with the M1 Garand, being a two-shot kill at close- and mid ranges, eventually dropping off to a three-shot kill at longer ranges.

The SVT-40 can be found in the hands of German soldiers in the campaign.

The SVT-40's two main advantages over the M1 are its slightly larger magazine size (10 rounds versus the M1's eight rounds) and noticeably lower vertical recoil. This allows for faster follow-up shots and the larger magazine can grant some extra edge in sustained gunfights as the two additional rounds can potentially allow the player to net one extra kill before a reload is needed. The SVT-40 however, suffers from a slightly slower reload compared to the M1 and has an even lower firecap than the M1, giving it a slower rate of fire overall.

The SVT-40's iron sights are relatively clean but are quite small compared to the M1's so the Lens and Reflex Sights are both good choices if the player wants a more precise sighting arrangement. Because the SVT-40' possesses such low vertical recoil, the 4x Optic combined with Advanced Rifling can make for a good Marksman build in objective-based gamemodes.

Quickdraw is a solid pick, as the SVT-40 relies on aimed accurate fire to be effective, though not nessesary due to already rapid sight-in time much like the M1 Carbine. Grip is not a neccesity due to the already low recoil, although equipping it on the gun will reduce the recoil down to an almost unnoticeable level.

Equipping Extended Mags will raise the SVT-40's magazine size to 15 rounds, bringing it up on par with the M1 Carbine which can be helpful at times but considering that the SVT-40 only requires two-to-three shots to kill a target, this is not a necessity. FMJ, like all rifles, improves the gun's damage when firing through obstacles/cover.

Steady Aim is ill-suited to the SVT-40, as the slow rate of fire and the poor hipfire spread make this attachment next to useless as the benefit it provides is negligle. Rapid Fire is similarly ill-suited, as the SVT-40 relies on precise single shots rather than volume of fire. High Caliber should also be avoided as it does little to increase head shot damage on the SVT.

Prior to the December 7th, 2017 update, the SVT-40 - S.O.L variants had misaligned iron sights. This has since been fixed in the update.[1]

The SVT-40 appears as a wall buy in all the primary maps for 750 Jolts and within the "Starter Weapon" Waffenboxes in The Tortured Path for 500 jolts.

The SVT-40 due to having a lacking magazine size, lower than average reserve ammo and low damage make it less than desirable for its costs.

When upgraded via the Ubersprengen, it becomes the AVT-40. The weapon gains a massive damage boost, as well as switching to a fully-automatic fire mode, making it one of the strongest automatic weaponry in terms of pure damage output, rivalling that of most Light Machine Guns, making it extremely effective on tougher enemies like Wüstlings and Brenners even into the high 30s. However, unlike most rifle weapons, The AVT-40 does not gain an increased magazine size by upgrading, limiting it to 10 rounds (15 with Extended Mags). It also gains a majorly increased recoil due to the change of firing modes, making accurate continuous fire extremely hard to pull off.

The SVT-40 in first person.

Aiming down the SVT-40's iron sights.

Inspecting a side of the SVT-40.

Inspecting another side of the SVT-40.

The SVT-40 makes a brief appearance, being used by Soviets in the Die Maschine intro cutscene. Kazimir Zykov can be seen holding an SVT-40 before entering the facility.

The SVT-40 returns in Call of Duty: Vanguard and is now classified as Marksman Rifle.

The SVT-40 can be brought into any map via Create-A-Class, at Loadout rarity and can be found at any rarity via the Mystery Box for 950 Essence. When upgraded via the Pack-a-Punch Machine, it becomes the SVT-L30-M.