For the non-bullpup variant, see Dragunov.
For a similarly named vehicle, see SUV.

The SVU-AS is a low damage per bullet sniper rifle. The SVU-AS will deal 70 damage per shot across all distances, making for a two shot kill. If a bullet hits the head, a 1.5x damage multiplier is activated, making the SVU-AS deal 105 damage, which is sufficient for a one shot kill if not shooting through certain cover. The SVU-AS easily has the worst one shot kill potential of all sniper rifles, and as such, many players treat it as a guaranteed two shot kill weapon. The SVU-AS has high penetration power, being able to shoot through most obstacles with ease. In Hardcore game modes, the SVU-AS will be a one shot kill at almost all times, bar shooting through cover.

The SVU-AS' rate of fire is quite high for a sniper rifle. It has the highest firecap in class, being able to be shot at 416 RPM, or roughly the same as the SMR in fully automatic configuration. This high rate of fire for a sniper rifle makes backup shots quite easy to make, as they can be placed in rapid succession. If players use the SVU-AS as a marksman rifle, its low recoil, low sway and high fire rate allow it to become a fast and deadly weapon.

The SVU-AS' accuracy is very good in its tier. The idle sway is the lowest, and its recoil is fairly low compared to other sniper rifles. This further encourages the user to make follow-up shots, as the recoil is easy to manage, making it so players can place fast and accurate follow-up shots. It should be noted that the SVU-AS has a lower than average zoom level on the default scope, making a fine line between the zoom of ACOG and the default sniper rifle zoom.

The SVU-AS' handling traits are above average for a sniper rifle. The SVU-AS aims down the sight and has the same hip-fire accuracy as other sniper rifles, and the SVU-AS has fast reloading properties, taking at least 1.96 seconds to perform a reload. This speed is fast enough if playing conservatively, but a more aggressive player may find these reloads to be cumbersome.

The SVU-AS has the largest magazine capacity in its class, holding 12 rounds per magazine. This size makes the user capable of engaging multiple enemies before having to reload. This is even further emphasized in Hardcore game modes, where the SVU-AS can make much better use of its ammunition.

The SVU-AS has the standard set of attachments available to it. The Suppressor is a very risky attachment, as it reduces the damage per shot to 50. This makes one shot kills impossible in core game modes, but the gun still is a two shot kill weapon when shooting at everywhere except the head. As well, it will reduce the SVU-AS' centerspeed by 10%, instead of the typical 2%, making the SVU-AS' recoil climb more easily if firing fast. However, the SVU-AS is very well suited to the attachment by default, as it retains many of its accuracy elements, and the loss of a headshot multiplier will be, for the most part, negligible.

The Ballistics CPU reduces 30% idle sway, making the SVU-AS have very little sway overall. This helps users place their first shot on target. This is questionable in value, as the SVU-AS already has the lowest idle sway in its class, making some view the attachment as overkill.

The Variable Zoom gives the SVU-AS two different, adjustable zoom levels. This gives the user much more flexibility in terms of accuracy, as they can either lower the zoom to increase their field of view, or increase their zoom level to place more focus on a certain area. Due to the SVU-AS' already low default zoom level, this attachment is very valuable for those who want more zoom.

Fast Mag is, for the most part, an unnecessary luxury. The SVU-AS has a large 12 round magazine, and the reload speeds are very manageable. It doesn't hurt to use it, but its benefit isn't very necessary.

FMJ is a decent option on the SVU-AS, as it allows the sniper rifle to shoot through almost all pieces of cover with extreme ease. With the SVU-AS' high rate of fire, this can let players kill enemies hiding behind walls with greater ease.

The ACOG gives the SVU-AS a lower zoom level, and doesn't remove the player's HUD when aiming down the sight. As well, the player is still able to hold breath while aiming, although the prompt to do so will not appear on the screen. If using the SVU-AS akin to a marksman rifle instead of a sniper rifle, ACOG is a very attractive option, as it gives the SVU-AS more flexibility at medium ranges, where a higher zoom level may not be needed.

Extended Clip increases the magazine capacity to 16 rounds and the starting ammo loadout by a third, but makes reloads at least 2.15 seconds long. The SVU-AS already has the best ammunition loadout and magazine capacity in its class, so its value is questionable. Extended Clip's value is dependent on whether or not players want to accentuate the SVU-AS' strength, or if they consider Extended Clip to be an unnecessary luxury.

The Laser Sight is an ill fit on the SVU-AS. Even with the attachment equipped, the SVU-AS has a ludicrously large hip-fire spread, and hip-firing is still a panic option at best. Some players like to use it to guide their shot on target while aiming, but this isn't as large of a necessity on the SVU-AS, which relies much more on landing multiple shots rather than a singular shot.

The SVU-AS appears in Die Rise and Buried, purchased off the wall for 1000 points. In Die Rise, it is located in the upper level of the mall which can be reached when dropping down the destroyed staircase behind the Quick Revive elevator (on the way to the initial Mystery Box spawn), while in Buried, its chalk outline is found in the Gunsmith shop and can be placed at any of six predetermined locations. Unlike most other sniper rifles, it is reasonably effective as a support weapon, due to relatively low recoil and high rate of fire, even though it has relatively low damage for a sniper rifle. Using it in conjunction with Double Tap Root Beer and aiming for headshots causes it to be a one-shot-kill until rounds slightly above 40. It is also pinpoint accurate, similar to the other sniper rifles post patch.

When Pack-a-Punched via the Pack-a-Punch Machine, it becomes the Shadowy Veil Utilizer and comes with a Variable Zoom scope. It starts out with a 12-round magazine and 192 rounds in reserve. It cannot be Pack-a-Punched twice for a random attachment. The Pack-a-Punched version of the SVU-AS also has an increased damage, and combined with Double Tap Root Beer, thus making it a worthy weapon for zombie survival, especially when it can be bought off the wall without the worry of relying on Max Ammo power-ups.

Upon obtaining the SVU-AS in Die Rise, the player will receive a message from Richtofen, if playing as Stuhlinger, or from Maxis, if playing as one of the other three characters that pertains to the map's signature Easter egg. 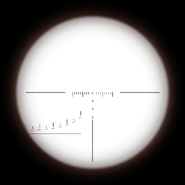 Semi-automatic
The SVU appears in Call of Duty Online as the OTs-03.

The SVU-AS is Marshall's starting weapon in the mission "Europa Falls", equipped with a suppressor. It is one of the only semi-automatic sniper rifles in the game.

The SVU appears in Call of Duty: Ghosts as a marksman rifle rather than a sniper rifle.

The SVU appears in the last campaign mission, "The Ghost Killer", where it can be found with an ACOG Scope. Some enemy snipers also use SVUs with their standard scope, but these ones cannot be picked up by the player.

The SVU is the most expensive Marksman Rifle, costing 9 squad points. It has the lowest rate of fire out of all marksman rifles (two thirds the speed of the MR-28), but unlike them it will always achieve a two-shot-kill to help compensate (one shot if it hits the head or neck), making it an ideal choice for long range maps. The permanent two shot kill ability makes the Silencer a good option, as it will keep the player off the radar, without any real penalty. An interesting fact to note is that the rim of the SVU's scope covers up most of where the blurred exterior vision would be on other sniper scopes, which can make for more precise firing (the only noticeable exterior blur is off to the very left); as well, when players consider that using the default scope makes the gun have 15% less recoil, and a lot of players will find optical attachments obsolete. The Iron Sight attachment for this weapon is very clear compared to other marksman rifles, making it a reasonable alternative to the Red Dot Sight. Despite the in-game description mentioning moderate recoil, the SVU has a quite low recoil in comparison to other marksman rifles. However, Burst Fire is quite a hindrance as the recoil is increased due to the attachment's properties, to such an extent one can even miss both the second and third shots at close-medium range. It is better to avoid close-quarters engagements and keep to medium or long range with this weapon.

The SVU appears in Extinction, in Nightfall and Mayday. It costs $2000 to buy. In Nightfall, one is leaning against the tower in the entrance, and another is in the compound. In Mayday, it is in the Cargo Area, against a wall.

The SVU plays extremely similarly to the IA-2 to the point where it is effectively a spiritual replacement to it on these maps. The SVU has a moderately sized magazine, a decent ammo loadout, and good per-shot power. The SVU with sufficient power buffs is capable of killing a Scout in one shot, but it will almost always need multiple shots for Hunters and Scorpions. Because of this, the SVU doesn't have enough of a damage advantage over fully automatic weapons like Assault Rifles to justify the far worse handling characteristics, rate of fire, more expensive price tag, more restrictive attachment compatiblity, shorter magazine, and shorter ammo supply.

Model of the SVU

Model of the scope

The SVU with Iron Sight