For the successor, see Swat RFT.
For a compact variant, see Grau 5.56.

The SWAT-556, also referred to as SIG556, is an assault rifle featured in Call of Duty: Black Ops II.

The SWAT-556 is unlocked upon completing "Fallen Angel". It can also be found in the mission "Cordis Die" in the hands of Mercenaries.

The SWAT-556 has an average magazine capacity of thirty rounds, and the user gets a starting ammo loadout of 120 rounds. This allows for ten bursts to be fired before needing to reload. Due to the burst fire limitation, good damage, and fast reloads, the user will not need to reload the SWAT-556 very often.

The SWAT-556 has the standard assortment of attachments available. The optical attachments are very popular to use on the SWAT-556 due to its long range inclination, but the iron sights are perfectly usable for those that want to save an attachment slot.

Fast Mag is mostly unnecessary since the SWAT-556 has little in the way of reload problems. Extended Clip only increases the SWAT-556's magazine capacity to 39 instead of the usual 40 so that the user doesn't have a one bullet burst remaining after firing thirteen bursts. Extended Clip will also slightly slow down the reload speeds, but they remain very fast.

The Foregrip increases the SWAT-556's centerspeed by two percent. The benefit is so small that the Foregrip is not worth using.

Select Fire is by far the most interesting attachment on the SWAT-556. The attachment provides the SWAT-556 a fully automatic setting, and differs wildly from the base SWAT-556 in the following ways:

Overall, these changes make the SWAT-556 monumentally less accurate, and the SWAT-556 also becomes much less lethal at medium ranges. The fully automatic SWAT-556 is very impractical for long range combat. Despite having a slew of disadvantages, the SWAT-556's highly increased overall fire rate will highly improve the SWAT-556's performance in close quarters combat. Select Fire is a very risky attachment, but the reward of highly improved CQC performance is very lucrative, and the user retains the properties of burst fire to fall back on for long range combat.

FMJ improves the SWAT-556's penetration power and damage dealt to scorestreaks. FMH allows the SWAT-556 to retain an even larger amount of its damage when shooting through objects, and the SWAT-556 can dispatch scorestreaks like the Guardian and Sentry Gun much more efficiently. The attachment is purely beneficial, but the user needs to make use of FMJ's benefits for it to be a useful attachment.

The SWAT-556 in first person 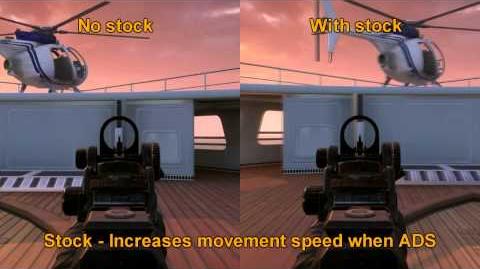