Call of Duty Wiki
Register
Don't have an account?
Sign In
Advertisement
in: Articles in need of better images, Call of Duty: Modern Warfare 3 GIGN Characters

"Je suis désolé... this is why Volk must pay for what he's done."
— Sabre after hearing about Sandman's friend.

Commander Sabre is a character in Call of Duty: Modern Warfare 3. He is the leader of a GIGN squad and participates in World War III during the Battle of Paris.

Presumably, he commanded some GIGN forces before the chemical attacks on Paris, during which he lost many men. He fights against Russian forces in the streets of Paris, but is pinned down by heavy resistance. Team Metal comes to their aid and he and his squad assist Metal 0–1 in the mission "Bag and Drag". Sabre leads them through the Parisian streets and into the catacombs, where he is nearly killed by a Russian soldier. They then locate Volk and pursue him out of the catacombs, where he flees in a sedan. Sabre is last seen when he and his squad-mates tell Team Metal, as they board the blue van, to go. Metal eventually captures Volk and extract intel from him. Sabre and his team are still alive.

Sabre in the Catacombs

Sabre with a gas mask 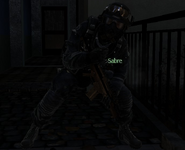