Saint-Lo starts off with the player spawning as Pvt. Nichols getting off a jeep in a U.S. camp along the outskirts of St-Lô. As he gets off the jeep, two or three American P-47 Thunderbolt fighters fly over. Pvt. Huxley calls the player over and gives the player an M1 Garand rifle betting 5 bucks that he can't shoot 4 helmets in a row. Nichols uses the M1 Garand and succeeds, and Huxley then tells Nichols to throw a grenade into an old barn house along the shooting range, and eventually a smoke grenade. After this, Cpl. Dixon orders Nichols, Huxley, and the rest of the squad to gear up and prepare to enter the city. Nichols then picks up a Thompson submachine gun and, along with the rest of the squad, climb onto the truck.

After the squad leader, Sgt. McCullin's "pep-talk", the truck begins making its way to the city of St-Lô. They pass by wrecked trucks and tanks, revealing that the Germans were pretty far out. Eventually, Pvt. Bueller starts chasing after the truck, which appeared to have left him behind. During the chase, German artillery begins shelling the road, killing Bueller, causing Pvt. Young and Pvt. Snyder to fall off, and eventually knocking over the truck, knocking Nichols unconscious for a second.

Nichols eventually regains his senses, and is pulled to safety by a soldier and Cpl. Dixon. They then meet up with Pfc. Guzzo, a radio op. It turns out that his CO was killed in Martinville, so Sgt. McCullin transfers him to his unit. The squad then climbs over a wall and into a graveyard, where some intense fighting takes place. Use the Thompson for close combat. A church up ahead houses an MG42 in one of its towers, along with several Germans, who are all raining fire on the American troops. After advancing further through the graveyard, an American P-51 is eventually shot down, and lands straight into the church tower, destroying it and eliminating the MG42 and its crew. The squad then advances further into the city.

Nichols eventually encounters a German soldier face-to-face, and begin a hand-to-hand fight. Nichols knocks out the soldier by slamming the butt of the German's Kar98k rifle in his face after they wrestle enough. Nichols then meets up with Sgt. McCullin and Pfc. Guzzo, who, along with some other U.S. soldiers, are taking cover behind a Sherman Tank from MG42 fire. Sgt. McCullin then orders Nichols and Guzzo to climb aboard the tank to give them firing coordinates to take out the MG42s. They successfully complete their objective, along with knocking out a German Panzer IV tank, but the wreckage eventually explodes, sending Nichols and Guzzo into a destroyed building. The two, along with Sgt. McCullin, then makes their way into a destroyed cafe.

They then regroup with the rest of the squad, Pvt. Huxley and Cpl. Dixon, inside the cafe. They realize that the rest of their unit didn't make it, and German artillery beings dropping shells near their position. Pfc. Guzzo insists on falling back, despite of McCullin's orders. Guzzo decides on ignoring McCullin and attempts to fall back, but the Sgt. then raises his Thompson and aims it directly at him, saying that desertion is "a capital offense." Dixon pleads to McCullin to calm down, and Huxley eventually finds a trap door leading to the wine cellar. McCullin tells Guzzo that they will "continue this later," and the squad proceeds into the cellar.

The squad makes their way through the cellar and back to the surface, where they find the German command post. After some rough fighting, the squad finally captures the building. Just as the squad begins to calm down, a tank shell suddenly hits the building, and Dixon yells out "COUNTERATTACK!" The Germans then attempt to make one final desperate assault on the building. The squad holds them off for as long as they can, until they are finally reinforced by U.S. Sherman Tanks, sending the Germans running. St-Lô is finally captured from the Germans, and is in American hands.

) - Obtained by beating the beginning of "Saint-Lo". 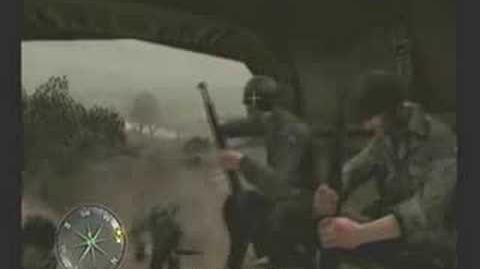 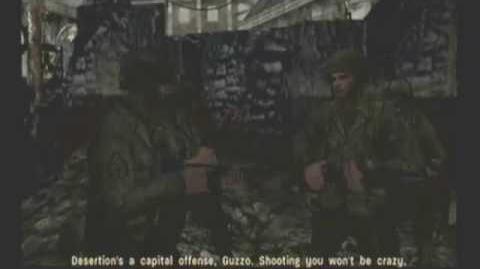 Retrieved from "https://callofduty.fandom.com/wiki/Saint-L%C3%B4_(level)?oldid=2457839"
Community content is available under CC-BY-SA unless otherwise noted.