Communications Officer (The Beast from Beyond)

Kendall 44, Hailstorm and any weapon obtained by the player

"From Valley Girl to Westside gangster, Sally has ditched her leg warmers for a pair of sagging khakis and a few tattoos. She may have lost her soft touch, but she’s more than ready to bust some caps and split a few wigs."
— Official Rave in the Redwoods biography

Sally Octavia Simpson is a playable character featured in Call of Duty: Infinite Warfare Zombies. She is voiced by Sasheer Zamata.

Sally Simpson was a TV star since a very young age, taking part in the reality TV series "Growing Up with the Simpsons" centered around her entire family. Her father is a jazz musician who is infamous for having various mistresses, and her mother is also a veteran actor who spends more time on her career than her family.

After the show ended, Sally ventured to make her own path in Hollywood. However, her career is overshadowed by those of her parents, as she is constantly bombarded by questions about them rather than her own pursuits and passions. She was desperate to become famous on her own terms somehow, and agreed to take part in Willard Wyler's latest film, despite not having watched any of his previous works. 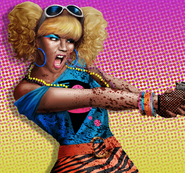 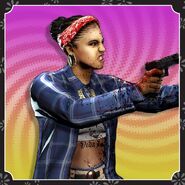 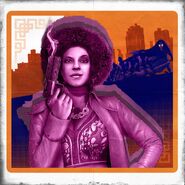 Sally with Poindexter, Andre and A.J. in Zombies in Spaceland.

Sally concept art for Rave in the Redwoods.