Salvage is a type of currency in Call of Duty: Infinite Warfare. It is earned by simply playing the game, completing Mission Teams levels, converting duplicated Supply Drop items and through earning daily bonuses, and can be used to purchase Prototype Weapon variants or supply drops in certain bundles. These variants often have traits which improve the weapon, similar to Weapon Variants from Call of Duty: Advanced Warfare.

During the 12 Days of Winter Supply Drop event, 200 and 500 Salvage were given on Day 3 and Day 9 respectively.

Salvage as it appears in a Supply Drop.

Salvage as it appears in Rare quality.

Salvage as it appears in Epic quality. 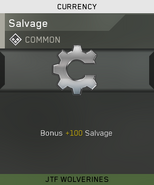 Salvage being unlocked from levelling up the JTF Wolverines Mission Team. 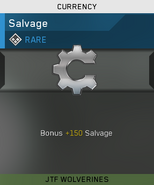 Salvage being unlocked from levelling up the JTF Wolverines Mission Team in Rare quality. 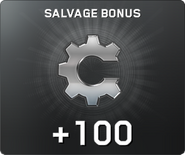 Salvage as a bonus in Rare Supply Drops.

A duplicate suply drop card awarding Salvage.
Add a photo to this gallery
Retrieved from "https://callofduty.fandom.com/wiki/Salvage_(currency)?oldid=2531503"
Community content is available under CC-BY-SA unless otherwise noted.