Deceased (in real-life and if cycle is broken in Alcatraz Pocket Dimension)
Alive (if the cycle continues; is revived each time the cycle restarts)

"What's the matter? You can't escape your own guilt? Do you feel it? Deep down? Nagging? Eating away at you? Is that really what you want? What do you think will be waiting for you when you get out, Sal? You think the city will be just as you left it?"
— Sal DeLuca to himself.

Sal DeLuca comes from a family of poor immigrants from Italy. Sal, as a fetus, with his mother, father, grandmother, made it to Ellis Island and settled down in America. Sal's early life has been simple, and his meals were paid by pops. However, Sal did not like his life as a simple guy, and decided to forsaken his parents and left for Chicago.

On July 18th 1922, Sal opened a casino in Chicago, which has marked the beginning of his new crime family. Sal's first big crime was stealing a shipment of Irish whisky from the north side of Chicago, where he shot a guy that has become disabled. Sal's crime empire was heavily involved in gambling, prostitution and the distribution of alcohol, and used the money he gained from this to set up his own criminal organization.

Sal has continued with crime, as he has taken the life, business and the girl of a big bootlegger from the north side, named Giuseppe Rioni. Sal took him out by shooting his skull, and left the blame on a guy Jimmy Alessi. The north side gangs demanded revenge, which has lead to a gang war within the city, from which Sal has become richer. In particular, Sal has unleashed Billy Handsome on members from Torrio's gang, leading to the death Torrio's men as well as innocent people near them.

Sal has been bribing people in the city to ensure his crime family succeeds, including people from the city hall, the mayor's office and Chicago's finest. However, on March 1th, 1929, Sal admits to a lack of support from Chicago's finest which leaves them with a disadvantage, realizing bribe is no longer an option. He marks out that the alliance of his outfit and the north side gangs must be kept, to make sure an event that happened in February 19th 1929 will not repeat itself. This event is suspected to be based on the famous valentine's massacre due the time proximity, as well as Billy Handsome's confession to have killed Albert 'weasel' Arlington in Valentine's Day.

On November 11th 1931, while being angry and frustrated with his collapsing empire, Sal kills a prostitute. No longer willing to turn a blind eye, Chicago's police department arrests him. In May 14th 1932, Sal is found guilty of murder and is sentenced to life in prison in Alcatraz Island.

Sal arrived with Billy Handsome to Alcatraz on June 13, 1932. Later on, the rest of the mobsters tried to escape via Icarus, a makeshift plane devised by Albert Arlington. However, as seen in the intro cutscene, the prison became overrun by the zombies. While he and the others tried their best to fight them off, Arlington and Michael "Finn" O'Leary were both surrounded and slaughtered. Sal and Billy ran, but Sal locked a gate behind him before Billy could get through, leaving him to his fate. However, his own karmic death came from a surprise attack by another group of zombies. In mob of the dead, Sal is stuck in time-looped Afterlife cycle like his teammates, where the four execute the plan to escape Alcatraz fly with Icarus, and then die by electric chairs on the golden bridge to reset the cycle and return to Alcatraz.

However, during the Pop Goes the Weasel Easter egg Brutus reveals to the four audio logs from Stanley Ferguson, which reveal that the escape plan actually never happened and Icarus was never built, as the three mobsters argued over complications and abandoned Arlington's plan. Feeling cheated, they created makeshift weapons and lured Arlington onto the roof, and then brutally murdered him and left him to bleed out on the roof. For this, Finn, Billy and Sal were sentenced to death via the electric chair, which was followed through with on January 19, 1934.

During the Easter egg, Sal and the others relearn of the failed plan and attempt to kill Arlington once more. If they succeed, "the cycle continues" and the events of Mob of The Dead restart. If Weasel kills the other three, however, "the cycle is broken" and Sal, Finn, and Billy die for good, while Weasel goes free.

In the Blood of the Dead ciphers, we learn that Sal, Finn and Billy write confession letters for their sins as for Sal's request. Sal believes their confession and contrition will save their immortal souls, as their way to get out of purgatory.

Sal and other mobsters appears in Blood of the Dead, as a form of spirit that roam around the island. Sal can be seen grabbing the warden along with Billy and Finn, preventing him to capture Primis again while Arlington leads the way. In the ending cutscene, Sal is released from Alcatraz once and for all, along with all the other souls trapped in the realm.

Sal thinks of himself as the leader of the group, though he has no real control of the situation. He comes to his own conclusions about the events that unfold, claiming that he must be in a coma due to Arlington spiking one of his drinks, warning him for the revenge that will come when he wakes up. Sal was friendly with Stanley Ferguson, and many of his comments relating to Ferguson imply that he feels guilty for having him killed. Sal is perhaps the most "Mobster" of the four and speaks in a near-stereotypical mobster accent while using a lot of slang.

At the end of the Pop Goes the Weasel Easter egg, Sal, Billy and Finn can either kill Weasel, or Weasel can kill them. Should Weasel die, then "the cycle continues" and the Mobsters must repeat the events of Mob of the Dead again. Should Sal, Billy and Finn die, then "the cycle is broken" meaning that the story can progress. It is revealed later however, this does not mean they were released as previously thought, but rather remained as spirits. In Most Escape Alive, Sal and his mobsters appear as spirits to hold the Warden down and buy Primis some time. In the ending cutscene, Sal is finally freed from Alcatraz along with the other spirits of Alcatraz.

Being the leader of the mob since 1922, Sal is the oldest of the group with visible wrinkles and obvious hair loss. He wears the standard prison uniform with 386A on the top right of the shirt. His hair (or what there is of it) is smooth and black and he is covered in blood like the other Mobsters. He seems to have darker skin compared to the others.

Sal talking to Stanley Ferguson while drinking from a mug. 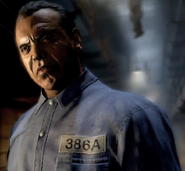