Sergeant Sam[2] Rivers is an African-American soldier who led a small tank battalion from 1st Armored Division of Patton's Third Army during World War II. Sam Rivers is only seen in the game Call of Duty: Finest Hour. He is playable in the level, Come Out Fighting.

Due to the bravery of Sam Rivers and the rest of his crew (who are also African-American), Sam Rivers was promoted to Sergeant.

Sam Rivers' role as Tank Commander in Tillet single player mission allows the player to operate an Allied Sherman Tank to help back up the Americans during the German assault on Bastogne. Sam Rivers kept fighting throughout war until his unit reached Remagen and met Lt. Walker's unit. He succeeded in taking Remagen and is later seen in the Last Bridge Standing level and talks to Chuck Walker before taking the bridge. He survived the war. He uses an M3 Grease Gun, and can pick up a Thompson, MP40 and a Panzerschreck.

A photograph of Rivers seen in the file selection screen. 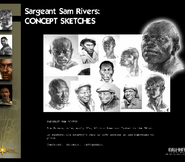 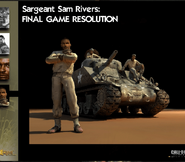