For a character with a similar name, see Samantha Cross.

All Treyarch zombie levels (Except for Nacht Der Untoten , Verrückt, Green Run, Die Rise, Mob of the Dead, Buried, Shadows of Evil, Zetsubou No Shima, Voyage of Despair, IX, Dead of the Night, and Ancient Evil)

"But I want my body back, and I will destroy that evil Richtofen for taking Daddy away!"
— Samantha after switching bodies with Richtofen.

Samantha Maxis is the secondary antagonist of the Zombies storyline. She is the daughter of Ludvig Maxis whose body was possessed by Edward Richtofen, who replaced her as the Demonic Announcer via his ultimate plan. In Call of Duty: Black Ops II, she is mentioned by quotes of both Richtofen and Maxis, and appears in the ending cutscene of Origins. In Call of Duty: Black Ops III, she is mentioned by Maxis in the opening cutscene to The Giant, as she is trapped in the teleporter with him, and she is also heard crying. She also supposedly serves as the demonic announcer in The Giant, Der Eisendrache, Zetsubou No Shima and Gorod Krovi though this is unknown as the true identity of the demonic announcer is ambiguous after Origins. In Call of Duty: Black Ops 4, she is the antagonist of Classified. However, this changes in Alpha Omega, where she joins Primis and Ultimis in their quest to defeat Doctor Monty.

She returns in Call of Duty: Black Ops Cold War Zombies mode as a side character in the Dark Aether story[1] as a member of the German BND seeking to stop the intrusion of the Dark Aether into the universe. She also has her own set of intel within Call of Duty: Black Ops Cold War dubbed "Maxis", and appears in the intro cinematic for Die Maschine.

Samantha Maxis was, reportedly, born to Ludvig Maxis and his unknown wife on November 5th, 1934. After his wife died in child birth, Maxis made sure she was always close to him. Due to his research, however, he neglected her and failed to notice Richtofen's experiments on her. As the experiments went on, Richtofen discovered more about Samantha Maxis as he learned more he grew to hate her and Dr. Maxis, perhaps due to Maxis' attachment to her or due to what she and Maxis had become. When Richtofen trapped Samantha in the room with Fluffy, her dog, and activated the teleporter, she was teleported to Griffin Station. There in a panic she accidentally came in contact with the M.P.D and took control of the zombies. In an effort to stop her and free her so that Richtofen could operate it, Groph and Schuster found and brought Maxis to her. However, Maxis told her to kill them all and killed himself shortly after, sending Samantha over the edge and on a rampage to destroy all of the Group 935, which had betrayed and essentially killed Maxis. After Richtofen trades bodies with her to control the zombies, she and the super soldier test subjects activate Maxis's backup plan and incinerate the earth, leaving Richtofen trapped in her body and able to control the zombies on the Moon and the remaining zombies on Earth.

After the events of Moon, Samantha is left in Richtofen's body until her father's plan can come to fruition ten years later. After the final polarization device is activated in Maxis' favor in Buried, Samantha's soul is taken to Agartha with Maxis where she sees the dark Aether's affect on him. She then contacts an alternate version of her father in a Group 935 excavation site in Northern France in Dimension 63, asking for him to free her. After the zombie outbreak at the site she convinces Tank Dempsey, Takeo Masaki, Nikolai Belinski and Edward Richtofen to free her from Agartha.

After being freed from Agartha her soul travels with Maxis to The House where she lives in a perfect universe along with her father, Ludvig, and the child versions of Richtofen, Dempsey, Nikolai, and Takeo. It is here where Monty uses his power to free her of the corruption of the Aether. After some time staying in the House with Eddie (Richtofen's soul), the Souls of the Ultimis Crew are turned into children and also spend some time with Samantha and Eddy until the Primis Crew arrive with the Summoning Key, in which the Shadowman resides and uses it to invade the 'Perfect Universe', and a massive Final Battle ensues between Primis and the Apothicons aided by the Zombies.

After the cycle of the universe is broken, Samantha and Eddie are teleported away from the house by her father, Maxis, to Camp Edward to prevent Monty from killing the both of them. Within the teleporter, she watched her father be devoured by the ancient Keeper, and unleashed her powers when arriving at Camp Edward in a fit of rage. She proceeds to give a speech about how her and Eddie will fight in The Great War and kill Doctor Monty. She accompanies Primis and Ultimis into a forest, where the adults of the group celebrate and pass out drunk, save for Ultimis Richtofen and Primis Nikolai. She and Eddie are pulled away from the rest of the crew by Nikolai, who proceeds to ask her to kill the "one who perpetrated all of this", with Eddie cowering behind her. When Victis gathered the Agarthan Device for Primis Nikolai, Samantha stood by as she saw the rest of Primis and Ultimis lying dead on the floor, poisoned by the alcohol they had previously consumed. After killing Undead Richtofen with a Welling, Nikolai handed the revolver to Samantha, with the clear intent of wishing to be shot. Before shooting Nikolai, Samantha asked Eddie to look away. After killing Nikolai, the dimension the children were left in was plunged into the Dark Aether. Fortunately, Samantha and Eddie were able to walk out of the Dark Aether into a new, uncorrupted universe, free from the effects of Element 115.

"Now in her early 30s, Samantha’s intelligence, fearlessness, and fluency with languages led her to a career in covert operations as an agent of the West German BND intelligence agency. However, the events of Black Ops Cold War lead her to go “rogue” as she attempts to stop the zombie outbreaks unleashed by the events at Projekt Endstation."
— Samantha's biography in Black Ops Cold War

Samantha grew up in the new universe, growing into her 30's and becoming a member of the West German BND. During a mission to rescue the Shah of Iran, she was rescued by Grigori Weaver, becoming an entrusted ally and friend to the Soviet-turncoat. However, due to the outbreak at the abandoned "Projekt Endstation" facility in Poland, she goes rogue in order to stop the anomalies and outbreaks that occur from the Dark Aether leeching back into the universe.

Samantha floating in the air.

Another view of Samantha. 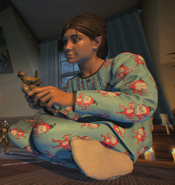 Samantha staring outside of a window within the House.

Samantha commanding a horde of Zombies in the Classified intro.

Samantha within the MPD.

Samantha and Eddie in the intro of Alpha Omega.

Samantha and Eddie are confronted by Doctor Monty in Alpha Omega's opening cutscene.

Samantha unleashing her powers against an Apothicon

Samantha is teleported away from the House.

Samantha, enraged by the loss of her father, releases a destructive pulse of energy across Camp Edward.

Samantha in the Alpha Omega outro.

Nikolai asks a favor of Samantha.

Samantha and Eddie listening to Nikolai. 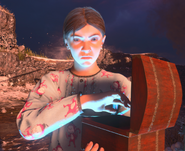 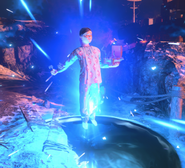 "Killing you purifies me!"

Samantha watches as Nikolai pulls a Welling out of his holster.

Samantha and Eddie leaving the Dark Aether, and securing a better tomorrow within a new universe.

Samantha in Call of Duty: Black Ops Cold War in her 30's. 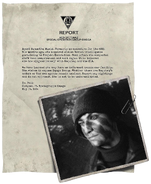 Omega Group report on Samantha.
Add a photo to this gallery

Retrieved from "https://callofduty.fandom.com/wiki/Samantha_Maxis?oldid=2550167"
Community content is available under CC-BY-SA unless otherwise noted.