"What do you mean 'lapdog'? Huh? I'm the only one that knows what to do."
— Samuel Stuhlinger, in the Buried cutscene

Stuhlinger, with the Victis crew, takes a central part in the Zombies Comics.

He can be seen in Call of Duty: Black Ops 4 in the map Blood of the Dead in a cryopod, as well as heard in phones in the map Classified. He is a playable character along with the rest of Victis in Tag der Toten. He was also added to Blackout as well.

After the destruction of the Earth, Samuel J. Stuhlinger was one of the few survivors left from the missile launch, and took shelter in a survival group called "The Flesh", who claimed that eating the flesh of the zombie hordes was the only way to survive their new anarchic world. This act of cannibalism granted Stuhlinger the ability to hear voices within the Aether, however the contact with the infected flesh gave him symptoms of the zombie virus.

Sometime later, "The Flesh", under orders from Richtofen, attacked a rival camp of survivors who had sided with Maxis. During the chaos, a horde of zombies moved in and destroyed all who remained. Samuel was one of the few to survive and met Russman, and the two commandeered a robotic bus to traverse the now-chaotic Earth in relative safety. Later, the bus stopped off at a small Town in ruins of Hanford, Washington, where they rescued fellow survivors Misty and Marlton from a horde of zombies. The group fought the zombies together and Samuel was contacted by Richtofen, who commanded him to polarize a pylon located in the town needed to enact his plans. Meanwhile, Dr. Maxis also contacted the survivors in hopes of them polarizing the pylon in his favor. They power the tower for Maxis.

Still hoping to gain control, Richtofen teleported Samuel and his survivors to a series of crumbling skyscrapers in Shanghai, China, where the second polarization device needed was located. There, he contacted Samuel once again and blackmailed Samuel into helping him, threatening to reveal his former affiliations with the Flesh, while Maxis also insisted the four aided him. While talking to Richtofen, a horde of zombies arrives, and Russman manages to rescue him. Saving Stuhlinger, Russman is then mauled by a Jumping Jack. Afterwards, Misty and Marlton arrive on an elevator, saving Samuel. The survivors arrive to another floor of the building where they are swarmed and killed by zombies. Richtofen, needing them to power the tower in his favor, resurrects them. The group then returns, having no memory of being killed before.

After powering the tower in Maxis' favor, Russman led the group through the ruins of Europe and Africa, hoping to find answers at the Rift in the Namibe Province of Angola. There, Richtofen contacted him once again to polarize the third and final tower located above the Rift, although Samuel felt reluctant in aiding him. Canonically, Samuel and the others aid Maxis in completing his goal of reaching Agartha. They survive the ensuing carnage and are contacted by Primis Richtofen. Richtofen opens a rift for them and they agree to help him. In the Call of Duty: Zombies (comic), Samuel, Misty, Marlton, and Russman begin a new journey to assist Primis Richtofen in acquiring the Kronorium.

If the player decides to follow Maxis' side of all three Easter Eggs, Samuel will fail to fulfill Richtofen's commands, and Maxis begins the process of destroying the Earth to reach Agartha with his daughter Samantha.

If the player decides to follow Richtofen's side of all three Easter Eggs, Richtofen enters Samuel's body and uses him as a physical host,sharing his body,on Earth, with his eyes now flickering blue as the Earth begins to repair itself using the energy from Agartha.

In the map Blood of the Dead, Stuhlinger can be seen inside one of cryopods along with the rest of Victis. When playing as Richtofen and interacting with the cryopods and proceeding to the step of Easter egg, Richtofen begins to hear Stuhlinger, the opposite situation from Black Ops II.

At some point during Primis' stay at Alcatraz, Victis are let out of the cryo-pods and are informed by another Richtofen about Dr. Monty. As Samuel is trying to understand the orders, zombies break into the lab. Suddenly a portal opens behind them and they enter. They arrive at Siberia, where Ultimis Richtofen instructs them to construct an Agarthan Device. After doing so, and sending it to Primis Nikolai, Stuhlinger suddenly loses contact with Richtofen. Stuhlinger asks if something went wrong. Richtofen (Undead Richtofen) says he hadn't forgotten about them, Stuhlinger asks what he is talking about before being banished to the Dark Aether. Undead Richtofen says he is sorry for deceiving Stuhlinger.

Samuel is a Caucasian man with a mustache, charcoal sweater, green vest, khaki shorts and glasses. He has short, grey hair, and appears slightly overweight. He also has a fanny pack.

In Buried, Stuhlinger has blood stains on his face and clothes and the right lens of his glasses have cracked, as well as having some parts of his clothes ripped.

Samuel is incredibly paranoid and seems to be a conspiracy theorist. He is frustrated with the lack of explanations to the events that occur and so he creates his own theories, often involving aliens or government cover-ups. Riddled with guilt due to his history of cannibalism, Samuel does not like to talk about himself around the others out of fear that they will either kill him or abandon him if they knew his secret. Samuel hates Misty and dislikes Marlton, but likes Russman.

In the comic series, Samuel's personality has changed somewhat. He no longer speaks about various conspiracies and does not seem to hate Misty as he even saves her life at one point. Although he still dislikes her and Marlton slightly, he is willing to work as a team with them in order to accomplish their goal of securing the Kronorium. 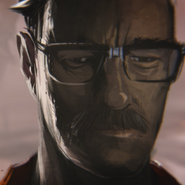 Stuhlinger's flashback of himself eating a zombie arm. Relating to his affiliations with the group, The Flesh.

Misty, Marlton and Stuhlinger are about to be swarmed.

After apparently dying, the characters are teleported back to the beginning.

Stuhlinger meets Misty and Marlton for the first time at Town.

Stuhlinger arguing over a campfire.

Stuhlinger with the others at TranZit.

Stuhlinger with the others at Die Rise, wielding an M1216.

Render of Samuel's model in BO2.

Stuhlinger, frozen in his cryopod as seen in Blood of the Dead.

Stuhlinger in the Alpha Omega intro.

Stuhlinger, along with Victis, recovering from their awakening.

"Doctor Minty? Is that a bad guy?"

"You haven't forgotten about us, have you?!?"

Victis, shortly before being banished to the Dark Aether. 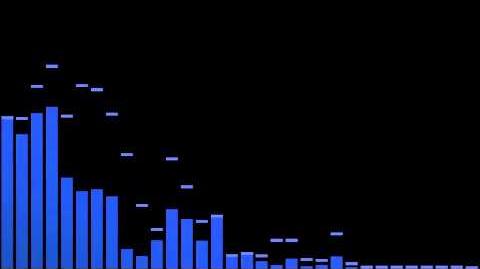