"Damn! Those were some pretty ballsy moves up there, soldier."
— Samuels to David in Cordis Die.

Agent Samuels is a Secret Service agent in Call of Duty: Black Ops II seen in the level "Cordis Die". Under normal circumstances, he plays a minor role in the mission, but if Mike Harper was killed in "Achilles' Veil", he will gain a much larger role in the level. He has similar lines to Harper in the event that he is not present, but if Harper is present, he will destroy the CLAW that is right outside the MRAP after the car crash, while Samuels will not, leaving the player to deal with the CLAW. Samuels is also not present physically, meaning the player will have to fight through a large portion of the level without an invincible ally, in contrast with Harper being in the mission. Samuels appears to be left-handed.

Samuels wears the same outfit as Jones and has an M1911 holstered on his Uniform like the LAPD and FBI. 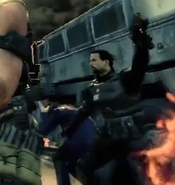