Shot wounds (in Down the Rabbit Hole)

"Hopefully you can keep up old man."
— Sandman to Captain Price.

Master Sergeant "Sandman" was the callsign of an operator in the Delta Force and the team leader of Delta Force unit Team Metal.

Sandman and Derek "Frost" Westbrook were positioned on a hilltop overlooking a facility belonging to Vladimir Makarov with a Barrett .50cal while Task Force 141 members approached and entered the facility.

It turned out to be a trap, and the joint team had to extract hastily. Soap was wounded in a nearby explosion during the escape, causing the rest of the team to have to carry him to the evac point. Price stayed behind to cover them as they escaped. The whole team escaped, except for Price, who was captured and sent to a Russian Gulag.

Sandman served in the United States Army under the Delta Force unit Team Metal, leading a team of experienced soldiers in World War III against the Russian army.

On August 17, 2016, Team Metal was assigned to destroy a Russian Electronics Jammer on the roof of the Stock Exchange. Facing heavy resistance, Sandman and his team managed to disable the Jammer. They were extracted by a UH-60 Blackhawk helicopter. They were then pursued by a group of Mi-24 Hind gunships in the skies above New York, which Frost destroyed.

Team Metal is then grouped with a squad of Navy SEALs to take control of a Russian Submarine (acting as a command vessel). Sandman and Frost infiltrated the sub after an underwater insertion through the Brooklyn Battery Tunnel and re-programmed the missiles on board to target the Russian fleet. The attack effectively crippled Russia's sea power and forced them to retreat as Sandman and Frost made their escape via Zodiac.

On October 6, 2016, following the massive terror attack and subsequent Russian invasion of Europe, Team Metal was assigned to a hostage situation in Hamburg, Germany involving the Vice President of the United States. They were inserted onto the beach via UH-60 Blackhawk and fought alongside M1A2 Abrams tanks as they pushed up the beach and into the city. They fought their way to a parking garage, where Carter was killed by a sniper. The team fought through the garage and continued on foot to the convoy after Rhino 2 was disabled. They were narrowly saved from being killed by an enemy T90 tank when Rhino 1 came out from the wall from the right and destroyed the enemy tank. They located the vice president's convoy, by that point empty, but were able to trace a trail of blood into an office building. After following the trail to a locked room, they breach and recover the Vice President. The mission succeeded and the Vice President was extracted safely.

On October 9, 2016, Team Metal was assigned to Paris, France to capture Makarov's bomb maker Viktor "Volk" Khristenko based upon intel received from John Price. While in Paris Team Metal was ordered by Overlord to rendezvous with and provide backup to the GIGN forces led by Sabre. After meeting up with the GIGN forces, they fought through the streets to reach the entrance to the catacombs. They cleared the catacombs and eventually located Volk. Volk fled out of the catacombs and, after a chase through the streets of Paris, they captured Volk alive. They then took Volk to the extraction point with air support provided by an AC-130. However, the extraction point became compromised and they had to travel to their secondary extraction point near the Eiffel Tower. Receiving air support from the AC-130, they managed to successfully extract Volk.

On October 13, 2016, Team Metal received intelligence from John Price that Makarov was targeting Boris Vorshevsky's daughter, Alena. Team Metal was assigned to Berlin in an attempt to extract Alena.

Team Metal was inserted into a war-torn Berlin. They were tasked with providing overwatch for Team Granite, who was going into the hotel to secure Alena. Team Metal was dropped off on a nearby office building, and Sandman fought his way to the rooftop alongside the rest of Team Metal. Sandman tasked Frost with various objectives while providing overwatch, including taking out enemy reinforcements suppressing Granite, and eliminating enemy tanks arriving at the hotel using strafing runs.

After Team Granite was wiped out by an explosion, Team Metal was retasked with securing Alena. Sandman and Team Metal rappelled down the office building and advanced on the hotel with the assistance of a German tank column. However, the Russians detonated a building rigged with explosives, sending it crashing down on Team Metal and the tank column.

When Frost came to, Sandman guided him through the ruins of the collapsed building. Eventually, they manage to reach the hotel. Team Metal advanced through the hotel, clearing it of hostile resistance. As Sandman and Frost prepared to breach the room Alena is held in, the door exploded, knocking both of them down. Frost used Sandman's pistol to take out the Russian enemies.

Sandman and Frost rushed into the room in time to see Alena carried away by a Russian helicopter. Grinch prepared to engage the helicopter, but was stopped by Sandman, who stated that they had failed their objective. Sandman contacted Overlord to inform him of the bad news.

Siberian Diamond Mine and Presumed Death

On October 14, 2016, Sandman, Grinch and Truck were assigned to a joint operation with Task Force 141. The combined task force infiltrated a diamond mine in Siberia, where Boris and Alena Vorshevsky were being held. After securing both Alena and the Russian President, Sandman aided Captain Price and Yuri by covering their extraction. A helicopter retrieved the President, Price and the wounded Yuri, but Sandman and the remainder of his team refused to board, and instead fought to the end. Their actions gave the helicopter the diversion necessary to successfully escape. Once the mine collapsed mere moments after the extraction, contact with Sandman was lost, and he and his team are presumed K.I.A.

A full body render of Sandman.

Sandman fighting off enemy soldiers as Price escapes in "Down the Rabbit Hole".

Sandman in the front of a Zodiac near the end of "Hunter Killer". 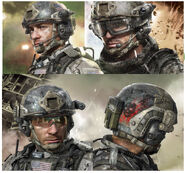 Concept art of Sandman with and without eye protection.

Sandman with an M16A4, alongside Frost and Truck in the mission "Iron Lady".

Sandman, as he appears in Call of Duty: Modern Warfare 3's campaign menu.

Sandman with Grinch and Truck.

Sandman without his visor.

Sandman passing a spare magazine to Frost during "Black Tuesday" after their truck was flipped. 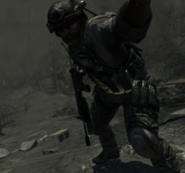 Sandman helps Frost after the building collapsed in "Scorched Earth". 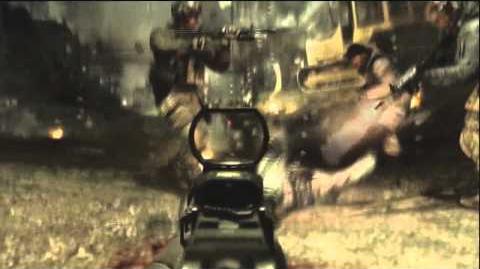