Call of Duty Wiki
Register
Don't have an account?
Sign In
Advertisement
in: Call of Duty: Vanguard Zombies Characters

Saraxis, also known as Saraxis the Shadow, is a character featured in Call of Duty: Vanguard Zombies mode. She is a deity of the Dark Aether.

Saraxis the Shadow is one of the many Elder Gods who reside in the Dark Aether. At some point in her life, Saraxis would join Kortifex the Deathless' Sisters of Agony. However, she would eventually leave the Sisters sometime before the destruction of Vercanna's clan during the Netherwars. A resistance against Kortifex soon formed, with Saraxis eventually joining along with Norticus the Conqueror, Bellekar the Warlock, and Inviktor the Destroyer. Saraxis, along with the rest of the four aforementioned deities, would become trapped in various artifacts that made their way into the "realm of mortals". Saraxis would become trapped in an artifact known as the Dragon of Saraxis. Early on in mankind's development, after arriving on Earth, Saraxis intervened in various civilizations with the intent of "playing" with them.

These artifacts would be discovered by Wolfram Von List and Die Wahrheit, remaining dormant in their possession. However, the breaching of the Dimensional Membrane at Poland by Projekt Endstation activated the artifacts. Kortifex, through his own artifact, would bond with Von List and allow him to command an army of the dead. The artifacts of the revolting gods would make their way into the ownership of Allied operatives deployed to Stalingrad, bonding with those who wielded them. The Dragon of Saraxis specifically utilized the power of Energy Mine.

"Listen closely, plaything. I know your kind better than the others. Better, even, than Bellekar. I've played with you clever monkeys since you raised your first cities. And you never cease to surprise me."
— Saraxis

Saraxis is jovial and carefree, albeit with a dash of narcissism. Saraxis views humans as toys, constantly calling them "playthings", although she is willing to admit that humans are special in their own way. She also appears to be apathetic towards the idea of morality, viewing notions of good and evil as "made-up nonsense that just gets in the way". 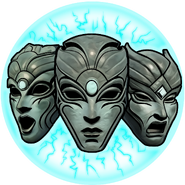 Saraxis, as seen on the Energy Mine icon.
Community content is available under CC-BY-SA unless otherwise noted.
Advertisement