The Scarab is a Scorestreak featured in Call of Duty: Infinite Warfare. It is unlocked at level 8 and requires a scorestreak of 450 points, making the Scarab the lowest value scorestreak to earn in the game.

It is a remote-controlled scorestreak that is very similar to the HC-XD, in that is is a remote, mobile explosive vehicle. When the Scarab is used, the user has 30 seconds to detonate it, or it will be automatically destroyed, with the explosion dealing no damage. The Scarab can be operated within three dimensions, utilising thrusters to reach certain heights. The Scarab can be detonated at the player's will. 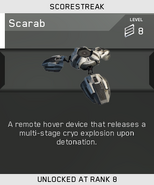 Scarab being unlocked in multiplayer.