Dearie (by Stanton)
Ms.Rhodes (by Bruno)

Scepter of Ra, Welling, or any weapon obtained by the player.

"When a mysterious cult abducts her father, adventurer and inventor Scarlett Rhodes enlists the help of three of his most trusted associates in order to embark on a rescue effort. However, the new found allies soon find themselves drawn into a battle that threatens the very future of mankind itself."
— Official Biography

Up until she was twelve years old, Scarlett lived with her father Alistair. This changed after a trip to the Museum of London however, as he would come to be arrested after he was caught trying to steal an artifact. After her father was arrested, she would come to live in a boarding school, and later with many relatives after her father left, including various aunts and sisters. At some point, she lived with family friend Stanton Shaw, where he tried, and failed, to build her a treehouse.

After receiving a letter from her father, Alistair Rhodes, Scarlett proceeded to arrive at her father's mansion to find her father. Upon reaching the mansion, she was turned away by her father's butler, Godfrey, who had been working with the enigmatic group known as "The Order" to kidnap Alistair. Scarlett is then pursued by multiple members of the Order into the woods, who she managed to dispose of. She then returned to the mansion, where she found all of Alistair's guests dead, and Godfrey being the only survivor. She shot Godfrey in the chest, then demanded that he tell her where the Order is taking her father. Before Godfrey can answer, he dies of the gunshot wound inflicted upon him. Scarlett then proceeds to chase after the car in which her father is being held. During the chase, her tires are shot out, resulting in her to crash into a tree. She survives the crash, fortunately, but sees off in the distance that her father has been taken by the Order on an airplane. She looks inside the letter her father sent her, requesting that if he were to be kidnapped, she must find three individuals who he can trust the most; Bruno Delacroix, Diego Necalli, and Stanton Shaw. She meets up with the three at some point and plans to take the Sentinel Artifact that is hidden upon the Titanic.

The Trial of Odin

The crew soon arrive on the Titanic, breaking through and gaining access to the Artifact. Unbeknownst to them, a member of the Order has also arrived on the ship, and snatches the Artifact from Scarlett, activating the Artifact and turning the passengers of the Titanic into hideous Zombies and other creatures. Scarlett proceedes to punch the Order cultist out of the "bubble" that appeared before her and the crew, transforming him into a Zombie. Afterwards, the crew complete the Trial of Odin. They are rewarded with a vision of a gate, which Shaw identifies as Delphi, Greece. The crew use a sailboat to travel to Delphi.

The Trial of Ra

When the crew arrive in Delphi, they make their way into a cave, where they are greeted and warned by the Oracle of Delphi. They proceed to inhale mystic vapours that allow them to see into the past, and they are transported into an arena created by the Order. There, they meet the leader of the Order, the High Priest of Chaos. He proceeds to activate the Sentinel Artifact of Ra, beginning the Trial of Ra. The crew, afterwards, completes the Trial, defeating the two giant, undead elephants Wrath and Fury. After the completion of the Trial, Scarlett demands that the Priest give her and her allies clemency by dictation of the "Novum Ignotum". The Priest refuses, and has the crew seemingly beheaded.

The Trial of Zeus

Upon exiting the hallucination, Scarlett, using the knowledge she obtained from the vision at the end of the Ra trial, is able to open a stone door by inserting the Alchemy code she saw. The four soon travel through the newly opened passage, where they find the city of Delphi. The Oracle contacts the four, begging them to she her free from the Zeus trial that has been going on for thousands of years. The four soon reactivate the Zeus Sentinel Artifact, and within the trial they ultimately defeat Perseus, the one responsible for the Zeus artifact's initial activation. Obtaining a key from Perseus, Scarlett frees the Oracle, who opens a secret passage, telling them that Alistair was there. While Shaw, Bruno and Diego go to rescue Alistair, Scarlett continues to unlock the bonds holding the Oracle to her chair. After unlocking them all, the Oracle swiftly possesses Scarlett's mind, allowing the Oracle, now revealed to be Medusa, to learn of all modern history based on Scarlett's knowledge. Diego, having discovered what was going on after finding Alistair and his captors petrified, rushes to Scarlett's aid and is able to distract Medusa before hiding from her attack. Medusa proceeds to unlock the knowledge needed to find the "library" with the Eternal Flame while Diego silently drags away Scarlett's comatose body. As Medusa leaves the temple, Diego hides from her with Scarlett behind a pillar.

Scarlett is headstrong and assertive, dedicated to finding her father. She is also a highly competent inventor, creating various devices to aid her in her quest such as the Ballistic Shield among others. While she cares about her teammates, she is easily aggravated by their antics.

While Scarlett finds Shaw's "medicinal habits" to be annoying, she does seem to like her "Uncle Shaw", who once took care of her. Scarlett also holds respect towards Bruno. However, like most of the rest of the crew, she highly dislikes Diego (especially because of his constant flirting towards her). 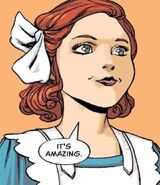 A young Scarlett Rhodes in the Zombies 2 comic, while at a museum with her father

Scarlett about to open the safe in Voyage of Despair 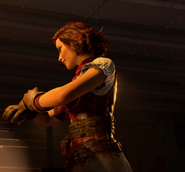 Scarlett acquiring the Sentinel artifact from the safe.

Scarlett in third person, with ICR-7 equipped with weaponized 115 camo.

Scarlett in-game in third person with an ICR-7.

Scarlett in the "Mad Hatter" trailer for IX.

Scarlett with custom KN-57 in game in IX.

"I know more than you think, and I'm nobody's slave!"

Scarlett and Diego opening the gate to Delphi.

The Chaos crew preparing to rapple down.

Scarlett and the others entering the Temple of Apollo.

Scarlett asking the Oracle about her father's whereabouts.

Scarlett with the Hand of Hemera.

Scarlett's mind being possessed by Medusa. 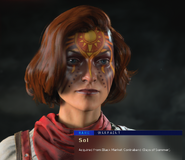 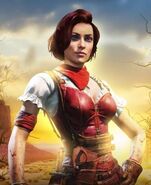 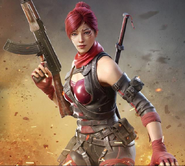