For perks with similar effects, see Bandolier, Surplus and Fully Loaded.
For a similar Perk-a-Cola, see Vulture Aid.
For a Trait with a similar purpose, see Resupply (Trait).
For the sniper rifle in Call of the Dead, see Scavenger (weapon).

In Call of Duty: Modern Warfare 2, it is unlocked at level 13. Scavenger resupplies one primary magazine, one secondary magazine, one piece of equipment, one special grenade, one Grenade Launcher grenade, and/or four Shotgun attachment shells when Scavenger packs dropped by player's corpses are picked up, regardless of any loadout differences between the player and the dead player. This perk also acts as a replacement for the ammo perks from the other games such as Bandolier and Frag x3, since it allows the player to restock on equipment.

With Scavenger, bodies will still drop weapons. Running over a weapon that utilizes the same caliber and magazines as the current weapon will not pickup ammo unless the weapon has the same attachment as one in use. For example, if using an M16A4 and running over an M16A4 with FMJ, ammo will not increase. Indeed, even picking up a camouflaged M16A4 will not increase the ammo for a standard M16A4. The player will instead have two separate ammo counts. Well-organized teams consider standardizing their weapon camouflage and attachments to facilitate ammo transfer.

Scavenger is usually the preferred perk in the first tier slot amongst players with higher killstreak setups. This is most likely because players need more kills before obtaining any killstreaks, which necessitates the need for more ammo replenishment.

The Pro version of Scavenger is unlocked once a player has resupplied 100 times while using Scavenger. Scavenger Pro allows the player to spawn with full ammo for the weapons they have, replacing the Bandolier perk from previous games.

The Pro version is not always useful, since ammo can be resupplied without it. However, Scavenger Pro is most useful for players who spend a long time distant from action, since their opportunities to resupply will be few and far between; the increased starting ammo count will permit them to extend their stay at the location of their choice.

Scavenger returns as a Tier 1 perk in Call of Duty: Black Ops. While its function is largely unchanged, some fine points have been tweaked.

Notably, Scavenger no longer replenishes weapon attachments, launchers and most equipment. If a certain amount of bags are picked up, the only pieces of equipment it is known to resupply is the Camera Spike and the Motion Sensor. However, Scavenger Pro will still increase the starting ammo loadout of launchers.

Scavenger is great for players using SMGs with small ammo capacity, like the Kiparis or the Skorpion, as the four total magazines can be expended quickly. It is also useful for players wishing to attain higher killstreaks, as more ammunition can be used to gain kills without worrying about running out of ammo. Scavenger Pro is the only way to consistely increase the amount of ammo that the player gets for their launchers, making Scavenger Pro a very common choice for players looking to use weapons such as the Crossbow and China Lake extensively.

The Scavenger perk replenishes one magazine of ammo for every Scavenger pack picked up. The perk is unlocked at Level 39 in Multiplayer. Scavenger no longer replenishes Lethal equipment like Frags and Semtex or Tactical equipment like Stuns and Flashbangs. It also does not resupply grenade launcher ammo, just like Black Ops. However, Throwing Knives and Underbarrel Shotguns can still be resupplied.[1]

Its Pro Effect allows the player to spawn with maximum ammunition. Like in Modern Warfare 2, the Pro Perk is unlocked when the player resupplies by picking up a total of 100 Scavenger Packs in Modern Warfare 3. This is widely regarded as one of the easiest Pro Perks to unlock.

Scavenger returns in Call of Duty: Black Ops II as a Tier 2 perk. It lets the player pick up ammo packs that are dropped by enemies that were killed by non-explosive weapons to replenish ammo and equipment. Lethal and tactical equipment are now resupplied, along with rocket launcher ammo. However, grenade launcher rounds are not. Unlike previous games, there is no way to spawn with maximum ammunition in Black Ops II (aside from some game modes that give full ammo by default).

This perk is often used with C4, allowing for formidable explosive offence, potentially many times in each life. It is also very useful with tactical grenades, such as Flashbang or Concussion grenades. A player using Scavenger, Fast Hands, C4 and Concussion (or Flashbang) grenades is well equipped for a mobile, offensive style of play, especially on CQC environments. Because it resupplies C4 so easily, it is a reason why some people have stopped playing Black Ops 2, akin to the notorious One Man Army/Danger Close grenade launcher spam from Call of Duty: Modern Warfare 2.

Scavenger returns in Call of Duty Online as a Tier 2 perk. Unlike the other installments its effectiveness has been greatly cut down to only replenish one magazine for the firearm you are currently holding, but not the other. It does not replenish any equipment whatsoever.

Scavenger returns in Call of Duty: Ghosts as an Awareness perk. It functions similarly to the version from Modern Warfare 3, as it does not resupply tactical or lethal grenades (except for throwing knives and the under barrel shotgun), only ammunition. However, unlike Black Ops II, Scavenger once again will cause enemies to drop ammo packs if killed by explosives.

This time, the player can spawn with maximum ammunition with the Fully Loaded perk, not with Scavenger.

Scavenger once again returns in Call of Duty: Advanced Warfare. It is similar to the Surplus perk from Call of Duty: Black Ops: Declassified, as the player starts with extra reserve ammo but not always maximum ammunition, as well as being able to resupply bullet ammo from fallen enemies. Rather than always giving full ammo, Scavenger doubles the starting reserve ammo (except when the maximum amount is less than the double of the the starting reserve ammunition, in which case the weapon will reach its maximum ammo limit).

Scavenger doesn't resupply ammo for specials (excluding the M1 Irons), and doesn't have any effect on the rocket launchers, the underbarrel grenade launcher and the exo launcher.

Scavenger returns in Call of Duty: Infinite Warfare as a Tier 2 perk. It lets users resupply ammo from dead players. It is unlocked at Level 37.

Unlike previous games, the player cannot replenish equipment with Scavenger. This has been replaced with Warfighter's Resupply trait.

It is also worth mentioning the perk returns in a special variation of the Specialist Strike Package (certain game modes only).

In All or Nothing, it is earned at one kill. 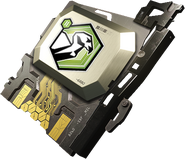 Scavenger returns in Call of Duty: Black Ops 4 as a Tier 1 perk.

"Pick up ammo from kills equal to the magazine capacity of the current weapon."
— Description.

Scavenger returns in Call of Duty: Mobile as a Tier 2 perk, under the name Vulture.

It functions identically like the previous games, pick up ammo from kills equal to the magazine capacity of the current weapon.

Scavenger returns in Call of Duty: Vanguard as a Tier 3 perk.