School is a cut campaign mission in Call of Duty 4: Modern Warfare. All that proves its existence in the game is a file called "compass_map_school.iwi" present in the game's source files. A vision file called school.vision was found in the game's source files. Two helicopters existed in the level, as seen in the picture (two helicopter shadows can be seen on the ground in the top left hand corner), though in the version of the level found, they are not scripted to do anything and lack collision detection.

The level is found fully playable in pre-alpha build 253, where it was still planned to feature in the final game, though missing much of its scripting. It would have taken place between Heat and Ultimatum. The only objective is to hunt down Drago Zakhaev, an early name for Imran Zakhaev. The mission was cut very late in development, as the mission list was almost final by this build. It was probably cut because it broke up the pace of the story. 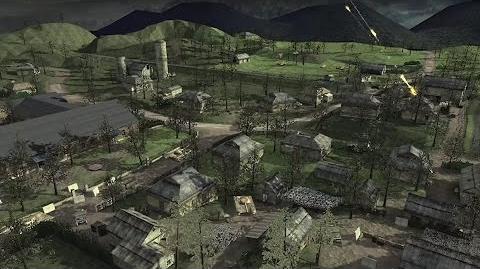 Retrieved from "https://callofduty.fandom.com/wiki/School?oldid=2453922"
Community content is available under CC-BY-SA unless otherwise noted.