"Reach the Russian President's daughter before Makarov's men get to her."
— Level description

"Scorched Earth" is the sixteenth mission of Call of Duty: Modern Warfare 3. The mission takes place in Berlin, Germany, as Delta Force, assigned to rescue the Russian President's daughter from the impeding attack by the Ultranationalists. Delta is supported by a column of German tanks from the Bundeswehr.

The mission starts with Frost lying on the ground, voices can be heard but are muffled, gunfire and explosions are sounding in the background also. Frost looks down at his hands and soon looks up to see Sandman running over to help him. The pair then starts moving past injured soldiers until they reach a collapsed building, where the screen fades.

Twenty minutes prior to this event, Frost is on an MH-6 Little Bird, flying into a war-torn Berlin where many American troops and German tanks advancing through the bridge across towards Alena's present known location. While flying towards their destination, one of the Little Birds is hit by RPG fire and crashes on the streets below.

Frost's ride lands on the roof of a building and Frost and the rest of Team Metal get off and start engaging hostile Russian forces. Once Team Metal has eliminated all threats on the roof, they move inside to the office areas. After clearing the first floor of offices, they ascend the building to reach the second floor. Here they fight off more Russian soldiers before reaching a staircase. This staircase takes Team Metal onto a rooftop, where the Russians have constructed a makeshift mini-base. After all the enemies here have been taken out, they signal Team Granite to start their assault on the hotel.

At this point, Frost and Grinch provide overwatch for Team Granite. This is where the player will need to use their Scoped M14 EBR for sniper support. Once all the enemies are down, Team Granite lands on the roof, but more hostiles suddenly appear from inside the hotel, and the player must kill them with their sniper rifle. As soon as all the enemies are eliminated, Russian tanks arrive in the streets below and begin firing on the hotel using their cannons. Using a SOFLAM, the player must target the tanks for a strafing run by friendly A-10 Thunderbolts. After all the Russian tanks are destroyed, Team Granite rappels down to a floor below. However, once they land on the floor, the door they are about to enter is suddenly breached, but Team Granite is luckily able to take them out before the breachers do so to them. They then proceed to enter through the door, making them no longer in Team Metal's line of sight, giving them no further sniper support. But this sadly becomes their downfall as they are ambushed  as soon as the round the corner through the door. The player then starts hearing gunfire and yelling on their radio as Team Granite becomes overwhelmed. An explosion suddenness goes off as the player hears it on the radio and sees it through the doorway, the radio goes static, Granite Team is gone.

With Granite Team eliminated, the team that was supposed to rescue Alena, Team Metal 0-1 informs Overlord of the situation. Overlord understands and approves of them taking over the responsibility of securing Alena. The player must then rappel down the building he is on along with the rest of Team Metal. After landing on the street, Team Metal goes through a back alley, where they meet the remains of the dead Team Onyx, until they reach the river bank, where they assist a German tank column to repel enemy Russian forces on the main street. Frost then destroys a Russian T-90 using an RPG-7 and Team Metal moves up the street with the German tank column. However once they reach the end of the street, a building rigged with explosives detonates, sending the building crashing down on the American and German forces.

Soon the player regains consciousness and wakes up in exactly the same place he had started the mission. He then follows Sandman through the ruins of buildings, until the hotel is visible across the street. Team Metal then battles Ultranationalist troops as they advance into the hotel and up flights of stairs to rescue Alena. When they reach the room Alena is being held in, they prepare for breaching. But before they can, the door explodes, sending the player to the floor. Frost takes Sandman's pistol and kills two Russians. After recovering from the explosion, the enemy helicopter takes off with Alena on board. Grinch tries to take a shot, but Sandman stops him, saying that it's too risky and that their objective has failed. The mission ends with Sandman relaying the bad news of the Ultranationalist capture of Alena to Command. 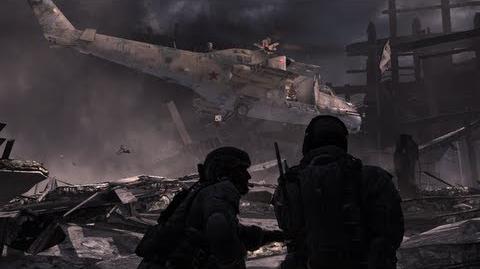 The building, before it collapses on the tank column and Delta Force.

The Russians got away with Alena.

Frost looking at his hands after waking up.

An A-10 Thunderbolt II flies as the player rappels.

37. Once dropped off by the helicopter, head into the building, go up the stairs, fight your way into the office and find the intel on a desk in a cubicle.

38. In the same building, on the roof, the intel is located behind the fences of a short platform with three air conditioning units, near some short metal stairs. The laptop has its back turn towards you, so look carefully as it blends in with the background.

39. After rappelling down the building, enter the bookstore. The intel is easy to find on top of the cash register.

40. Once you made contact with German tanks, locate the Teknik Deutsch building on the left side of the street. Head inside the lobby and look for the intel beside the elevators.

41. Near the end of mission, after fighting your way into Von Werde Hotel, you will reach a staircase with brown door. Wait for Sandman to open it. Find the intel on a black coach beneath the stairs. 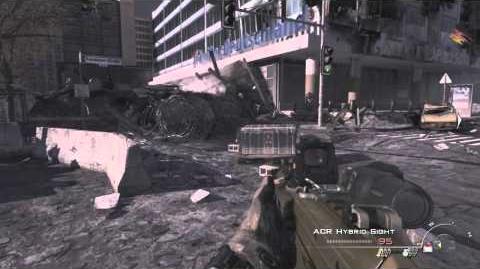