For the perk, see Scrambler (perk).
For the similar equipment, see Jammer.

The Scrambler is a piece of tactical equipment in Call of Duty: Modern Warfare 3 and Call of Duty Online.

It is a deployable item that jams enemy radars within its effective radius, similar to the Jammer from Call of Duty: Black Ops. The Scrambler can be picked up and replaced at any time.[1]

Another feature of the Scrambler is that when its user is within the Scrambler's radius, it grants an effect resembling the perk Blind Eye. Since the secondary effect of the Scrambler resembles Blind Eye, using this equipment with a different Tier 1 perk is a viable option. Similar to the Portable Radar, the effective area of a deployed friendly Scrambler will appear on the whole team's radar, allowing for tactical team use. The Scrambler is not affected by enemy EMPs. The effective area for the Scrambler is very low, however, at only about 5 meters. Similar to the Black Ops incarnation, it is a piece of equipment that sees very little use. Overall, it is best left untouched unless going for challenges or calling cards. Otherwise, equipment like the Trophy System or Portable Radar would find much more use. However, becuase of the aforementioned Blind Eye-like ability while standing in the radius of the Scrambler, an anti-air class could forego the Blind Eye perk, replacing it with something else, such as Scavenger to get more rockets for the player's launcher.

First person view of the Scrambler

A player preparing the Scrambler

The Scrambler in the hands of a Delta Force operative 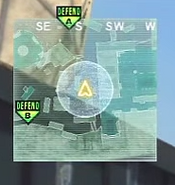 The scrambler makes a reappearance in Call of Duty Online.