"Maximum firepower achieved."
— Reaper after getting a kill with the Scythe

The Scythe is available after having unlocked Reaper.

The Scythe holds 100 rounds, fires at an incredibly fast rate of fire with amazing damage per shot, usually taking three bullets to kill enemies, with minimal recoil. It is one of the strongest overall Specialist weapons, while being very simple to use.

Like past miniguns, there is a firing delay when the Scythe is not being aimed. While Reaper's movement speed is already slow while moving with the Scythe, it is severely reduced while aiming, but the Scythe can be fired immediately once it begins revving up. The player's movement is reduced further while actually firing (regardless of the method), potentially leaving them vulnerable if in the open. Therefore, it is best to use it in a building with decent sightlines, where there are few openings for Reaper to be attacked other than head-on.

The Scythe's rapid fire rate causes the weapon's meter to deplete quickly, so players must choose if they wish to play conservatively or unleash a rapid barrage of bullets all at once. Like other Specialist weapons, the meter will also deplete over time, even if ammo remains.

After the 1.04 patch, the Scythe charges the slowest out of all the Specialist Weapons, at 6 minutes on Team Deathmatch (or 4 minutes and 30 seconds with Overclock).

The Scythe in first person

The Scythe returns in Call of Duty: Black Ops 4 during Operation Apocalypse Z with the return of Experimental War Robot-115 "Reaper" to Multiplayer.

The Scythe has been entirely changed from an arm-mounted minigun to a detached turret, gaining an additional 50 rounds to a total of 150 rounds per activation.

The Scythe in first-person view

Aiming with the Scythe 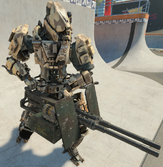 Reaper armed with a Scythe
Add a photo to this gallery

Retrieved from "https://callofduty.fandom.com/wiki/Scythe?oldid=2543216"
Community content is available under CC-BY-SA unless otherwise noted.