Some levels in each game

The Sd. Kfz. 251 was the standard German armored personnel carrier during World War II. They are a common enemy in the series, and are typically destroyed using anti-tank weaponry such as Panzerfausts or Panzerschrecks. In almost all appearances, they are shown armed with an MG42. On certain occasions, they are also shown in their capacity as troop transports.

Halftracks are a common armored enemy in the campaign of Call of Duty. They are never seen transporting troops. Instead, their MG gunners provide withering suppressive fire. The fact that the machine gunner is protected by a bullet shield also makes them very difficult to pick off. Generally, shooting the machine gunner is enough to stop the threat, but they may also be destroyed using anti-tank weaponry such as the Panzerfaust 60, the Panzerschreck, the Flak 88 or the Flakvierling. They cannot be damaged by bullets or grenades.

The halftrack is encountered numerous times usually as road block and sometimes delivering German troops to the battle zone. They require being knocked out by explosives or Panzerschrecks.

In Call of Duty 2, half-tracks are encountered numerous times in the campaign, generally as armored support, personnel transport, or as rocket artillery (Panzerwerfers). They can be destroyed using the Panzerschreck. If the half-tracks are carrying Germans, the player can go to the door where the soldiers come out of, and shoot all the Germans, including the gunner. 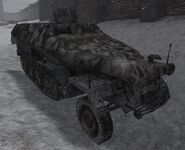 The half-tracks in Call of Duty 2: Big Red One were equipped with MG42, and are also used by Vichy France and Italy. They can be destroyed with an MG42, Bazooka, or M2 Browning Machine Gun.

The Sd. Kfz. 251 in Call of Duty 3 is similar to previous incarnations, being armed with an MG42, and can be destroyed by anti-tank weapons such as the Bazooka. Without any weapons, the gunner can simply be shot dead, nulling its offensive capabilities. It is most prominently seen in the level "The Crossroads" supporting the German counter-attack.

It can be seen on the levels "Vendetta" and "Their Land, Their Blood". In "Vendetta", the player has to shoot out the gunners of two half-tracks for the troops to advance and one will fire on them if they take too long. A fourth will come while the player tries and snipe Amsel. In "Their Land, Their Blood", there is a Sd. Kfz. 251 when the player moves in on the German camp, after they take out the three trucks with infantry on them. It can be destroyed with one to two shots from a Panzerschreck, which are scattered throughout the level.

The half-track is seen in "The Battle of Bure" and "The Rhine". The player is usually ordered to take out its half-track using TNT or Panzerschrecks.

A Half-Track in the "The Battle of Bure" mission.

A Destroyed Half-Track during "The Rhine" mission.

The Sd. Kfz. 251 appears during the World War II simulation in "Demon Within". The vehicle can also be seen in some areas in Dead Ops Arcade 2: Cyber's Avengening. It is also seen in the Zombies map "Der Eisendrache."

The Sd. Kfz. 251 (Only mentioned as "Halftrack") appears throughout the campaign in the game. The half-tracked is mounted with a MG42 machine gun with steel plate cover. The player is able to get on the gun if no enemy soldiers is on the vehicle. It is also possible to destroy it with a single Panzerschreck shot or two Rifle Grenades, as well as a direct Mortar Strike.

The Sd. Kfz. 251 appears as scenery throughout the map Berlin. They are unusable.