Sergeant Sean Brooks is a character in Call of Duty: Infinite Warfare. He is a SATO Marine serving alongside Nick Reyes. Brooks is the first among his family to have joined the Marines and he serves and represents his country with honor and distinction to the best of his ability.

He replaces Staff Sergeant Usef Omar after his death as commanding officer to the Marines abroad the Retribution and serves Captain Reyes loyally. He is one of the four to have survived the Operation Blood Storm, along with Nora Salter, Erwin Kloos and Evelynn "Boats" Sotomura.

Brooks in known to be a loyal marine, he is quick to respond to the situations at hand, an example of this would be when his Staff Sergeant perishes, he tries to calm both Kashima and Nick Reyes as he realizes that there is virtually no chance to save Omar, whilst both of them hope to rescue him.

Brooks on the right. 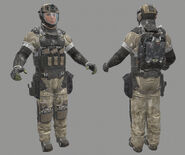