For the character with a similar name in Call of Duty: Modern Warfare 3: Defiance, see Vargas.

"Trained in Jungle Warfare and anti-narco operations, Vargas joined the M-19 guerilla group to fight against a government he considered corrupt and the cartels he believed to be pulling their strings."
— In-game biography 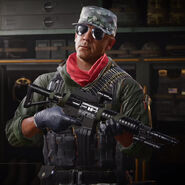 Vargas, as seen during the Multiplayer Alpha.

Vargas' bio in Warzone. Note the unclassified first name
Add a photo to this gallery

Retrieved from "https://callofduty.fandom.com/wiki/Sebastian_Vargas?oldid=2568980"
Community content is available under CC-BY-SA unless otherwise noted.