Security Dogs [1] are enemies in Call of Duty: Advanced Warfare in Exo Zombies.

As suggested by their name, they are dogs that were used by the security team that were zombified.

Security Dogs, like Hellhounds, appear during special rounds (An-G will say it in the beginning of the round). The dogs will come out of their kennels [2] and attack the players. When the last one is killed, it will drop a Full Reload power-up.

Dogs can spawn either as regular ones, or as special ones that behave like EMZs, who can disable the player's exo. There is also a type of dog that behaves like Exploders.

While rather weak opponents, they deal the same damage per attack as regular zombies and are faster, which can make them dangerous, especially the EMZ-like ones. They can also jump up to high ground, leaving players defenseless when above them.

Unlike the Hellhounds, who are not drawn to Monkey Bombs, the Security Dogs are drawn to Distraction Drones.

In Infection, Security Dogs no longer spawn during special rounds, and will spawn randomly along with zombies.

In Carrier, Security Dogs once again have their own round as with Outbreak. A new variation of the Dogs now also have the ability to teleport, in addition to the EMZ and the Exploder types. These will have horizon blue eyes instead of yellow ones. 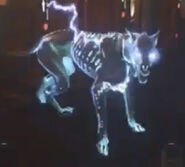