Seeds of Doubt is a the main easter egg in the Zombies map Zetsubou No Shima that appears in Call of Duty: Black Ops III. It requires the player to "save" the original Takeo Masaki. It is possible to complete this easter egg with any number of players, including solo.

Before starting the easter egg, the player must obtain the Skull of Nan Sapwe. At least one person in the game must have the Anywhere But Here! GobbleGum in their pack.

Throughout the course of the easter egg, the following will be required:

Once the players have obtained the Skull of Nan Sapwe, a player must go down to the Living Quarters in the Bunker and go over to where the purple water is. Using the skull, the player must mesmerize a piece of paper on the wall across from the purple water, which will reveal the second half of the paper. This will now allow players to remove secret walls and doors hidden on the map.

Across from the door leading to the anti-aircraft platform is a an inaccessible elevator. Left of the elevator by the corner is a piece of wall that can be opened using the Skull of Nan Sapwe. The player must mesmerize the door, which will disappear, revealing a broken generator powering the elevator, which is missing three cogs.

These cogs can be collected in any order.

Contrary to some misconceptions, the GobbleGum may be used from anywhere and before defeating the Giant Spider.

For this step, the player must have a bucket and at least one seed. Plant the seed, then water the plant with blue water and shoot it with the KT-4 once every round for three rounds. Once the plant is fully grown, opening the pod may reveal a flak shell which can be inserted in the FlaK 88 cannon at the anti-aircraft platform. As the shell is not guaranteed, growing three seeds at once is recommended.

The shell can be loaded in the cannon at its back by holding the action button, which produces a sound effect. Once the shell is in the cannon, the player must wait for a cargo plane to fly over the map. When the plane is in sight and lined up with the barrel of the cannon, the player must hold the action button on the FlaK 88, which will fire the round at the plane, destroying it. Once the plane is destroyed, the cog can be located outside the entrance to the Bunker, by the meteor by Lab B or by the staircase leading up to the Zipline by Lab A with smoke emitting from it. The cog can then be picked up by the player.

Note: If the player shoots and misses the plane, the shell must be recollected again by growing another plant.

All players in the game must complete all of their Trials of the Ancients located at the area where the skulls can be found. Once all the challenges are done, lightning will strike the platform periodically. To do this step, the player must stand on the platform with the Zombie Shield equipped while the lightning is affecting the platform. Once done, the player must head over to the zipline between Lab A and the docks. The cog is on the small dock underneath the zipline, which can be reached in two ways:

Note: If the player lets go of the zipline too early, they will fall into a death zone and immediately die.

Step 3: Activating the elevator and battling the Giant Thrasher

Once all three cogs are collected, bring the cogs to the generator in the room behind the elevator and hold the action button on the generator, which will make the operation functional. Before going down, all players must have a gas mask equipped and have at least one KT-4 upgraded into the Masamune. All of the players must go into the elevator and use it, which will then take them to a secret part of the bunker. Once the players reach the bottom, the player with the Masamune must shoot the three vines in the path at the glowing part leading to a door at the end of the hallway.

Primis Takeo looks into one of the prison cells, noticing Ultimis Takeo being held captive, who in return recognizes Primis Takeo as his alternative self. He remarks how he has won many battles and become a hero, but his victories were not welcomed; Primis Takeo shares some of these memories. He is outraged at the conditions Ultimis Takeo was put in, believing it was beyond acceptable punishment and wondering who could inflict such suffering on someone. Ultimis Takeo reveals that he was betrayed and ordered to imprisonment by the Emperor himself, which shocks and disillusions Primis Takeo, who had been always loyal to him. He suggests that Ultimis Takeo helps them secure a better tomorrow, to which he agrees, by committing seppuku with Primis Takeo as his kaishakunin. His soul is then collected by the Summoning Key, and Richtofen briefly teleports the four somewhere and back to set a chain of events in motion—something he refers to as an "insurance policy".

Upon completing this easter egg, the player will have unlimited perk slots. All players will also gain 5,000 XP, for which the reward title is "Horticultural Heroism". 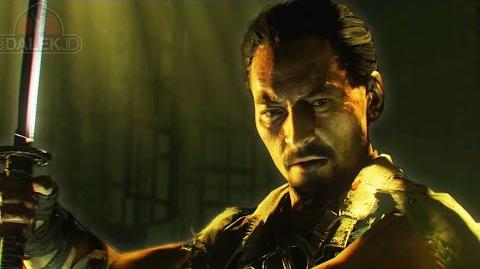