Call of Duty Wiki
Register
Don't have an account?
Sign In
Advertisement
in: Call of Duty: Infinite Warfare Lethal Equipment

The Seeker Grenade is an autonomous lethal equipment in Call of Duty: Infinite Warfare. It seeks out enemies and detonates when near them.

"A small, deployable robot that seeks out enemies and self-destructs."
— Description

Seeker Grenades are encountered fairly often in the campaign, known as Seeker-Bots, and are available as a loadout option in the Retribution's armory. Seekers are rarely used by enemies, with the exceptions of Operation Burn Water and Operation Black Flag.

Seekers can be especially useful on Veteran difficulty, where they can not only tag enemies through solid walls, but can also chain together kills and clear rooms quickly without wasting ammo or getting hurt. It can also be used to disable C8s.

If a Seeker is deployed in a peaceful area, it will simply run back to the player, prompting it to be re-equipped. Only two Seeker grenades can be active at a time, as the rest will simply disappear and become unavailable to equip. If a Seeker is left alone for too long without any enemies to latch onto, it will "die", collapsing and being unable to be equipped.

Seeker Bots have two upgrades: The first allow it to be held charging like Frag Grenade to switch between targets, and the second to explode immediately on the player's command.

"Autonomous sticky device that seeks out nearby enemies and explodes."
— Description

The Seeker Grenade is unlocked at level 10. It functions similarly to it's campaign counterpart, but it has a shorter seeking range and will not latch itself to an enemy player, instead just exploding after a short delay.

A "dead" Seeker in the campaign. 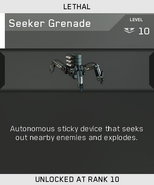 The Seeker Grenade being unlocked in multiplayer.