For the Special Ops mission in Call of Duty: Modern Warfare 2 with a similar name, see Sniper Fi.

"Escape capture and join Carlson's Raiders for a surprise attack on the Japanese fortifications at Makin Island."
— Level description

"Makin Atoll, little more than sand, trees and a small Japanese military base. Miller's reconnaissance team landed there almost a week ago, since then we've heard nothing. The waiting's over. We're going in. For all we know they're already dead. If what little we know about the Japanese is true, it might be better if they are."
— Roebuck in the opening of Semper Fi

"Semper Fi" (short for "Semper Fidelis", which is Latin for "Always Faithful") is the first campaign mission of Call of Duty: World at War. This mission takes place on Makin Atoll in the Gilbert Islands, part of the British colony of the Gilbert and Ellice Islands, occupied by Japan since August 17, 1942. It depicts the Raid on Makin Island.

Pvt. Miller from the 2nd battalion of the Marine Raiders, Carlson's Raiders, is held captive by the Japanese forces, and witnesses his comrade, Pvt. Pyle, being tortured by having a cigarette gouged into his eye. The officer orders the PFC to kill them both. Pyle's throat is then slashed by the PFC as Miller watches, his last words being "Go to hell". The PFC then goes for Miller, but before he can slash his throat, Cpl. Roebuck comes in and stabs the PFC in the back. He leads him out of the hut, saying "We're gonna make 'em pay for what they've done."

Miller and the rest of the squad secure the village by killing the Japanese in the area. After the first part of the village is secured the team heads for second squad's position. Along the way, the team faces banzai charges and booby traps. Miller eventually makes his way through the island to rescue the second squad who are pinned down on the beach, followed by surviving an ambush of Japanese troops playing dead.

Using a leaky fuel truck, Miller and the others attack the Japanese base, then proceed to arm explosives inside the bunker, crippling their operation there. While making his way to the boat, Miller is attacked by a banzai charger wielding a katana and wounded, but is saved by Sgt. Sullivan when he shoots the Japanese soldier in the head with an M1911. Ultimately, Miller is dragged to the boat and witnesses a large explosion, which destroys the base. 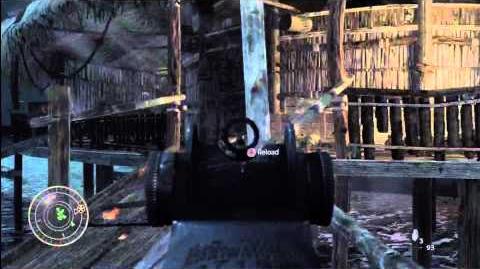 A Marine Raider aims his M1 Garand on Makin Atoll.

A Marine Raider fires his Thompson during the attack.

Sergeant Sullivan signals for the Marines to follow him.

Lozano kills a Japanese officer with his M1911.

An Imperial soldier fires back at the Marines.

) - Save Pvt. Ryan before he burns to death.

) - Complete Semper Fi on any difficulty.

At the very beginning of the mission, after being saved by the Marines, there will be a small hut opposite the shore. The death card will be by the jungle and directly right of the player heading into the attack.