Semtex is briefly seen in "Contingency" if the player does not shoot down the helicopter before John Price enters the submarine, in which case Ghost will 'knock' it out of the air with Semtex. The same applies for the BTR. Some bricks of Semtex can also be seen on the table full of explosives in Makarov's safehouse during "Loose Ends".

Semtex replaces flash grenades in 'Body Count' and 'Wreckage'; it is rather strange that the player can carry two types of lethal grenades. Nevertheless, they are very useful, being able to destroy BTRs with a direct hit in 'Body Count' and it can also blow up standard vehicles in 'Wreckage'.

Semtex takes up the equipment slot. It is comparable to the standard Grenade but with some differences. It is actually a ball of C4 explosive with a timed detonator attached to it, thus, it cannot be cooked, though the timer is shorter than a Frag Grenade's fuse. At close range, the delayed explosion gives opponents time to escape. However, the timer counts down while the Semtex is in flight and will explode almost immediately after landing if thrown over long distances. It has a blinking red light and beeps softly, making it easier to spot and avoid. This makes it useful for flushing enemies that have hunkered down, as they may run from cover if a Semtex charge is tossed in proximity, and if they do not run fast enough, they will be killed or severely injured. Because the grenade sticks to the first surface it touches (except glass, which shatters while the Semtex trajectory remains unaffected), it will not bounce and roll past the desired target. This is very useful for accurately sticking the grenade to the Headquarters, narrow platforms, or hillsides. Additionally, it can be stuck to the window sill in front of an enemy rather than actually requiring the grenade go through the window (a throw which, if missed, often means a cooked grenade comes bouncing back at the thrower.) Additionally, Semtex grenades cannot be thrown back at the original sender.

Semtex is more powerful than a Frag Grenade: it has a larger explosive radius and the highest explosive damage of any equipment in the game. It is the only grenade that, without Danger Close, can destroy the large gas tanks found in Highrise, Underpass, Overgrown, Derail, and Terminal. Unlike the fragmentation grenade, Semtex cannot be overcooked, though sticking a Semtex too close will still cause a suicide.

Due to its stickiness, it is very useful for taking down Riot Shields, which it attaches itself to. However, if the shield user has Blast Shield they may survive even a direct stick to the shield. Many players will also run away from the riot shielder and throw it on the ground while running resulting in the shielder running over the Semtex and dying.

Less frequently some people will stick Semtex to a teammate and have them run into a group of enemies - mainly for the "The Resourceful" challenge, in an attempt to kill at least one or two enemies. This works best in Domination or Headquarters, where larger groups of enemies will likely be trying to capture an objective. It is not recommended to try this in Hardcore modes, where friendly fire may kill teammates in the process.

The explosive power and blast radius of Semtex also make it useful for rushing classes because it can clear larger areas than a fragmentation grenade and does not ever require cooking.

Since Semtex cannot be cooked to detonate sooner, it is advised to arc the throw upward if possible. This will allow the explosive to still reach its target, but detonate sooner relative to the enemies noticing. Consequently, the enemies will have less time to react and are more likely to be killed if the throw was accurate.

The Semtex being cooked.

Render of a Semtex.

Sticky_grenade_mp
Semtex returns in Call of Duty: Black Ops. It is briefly seen in the campaign and is one of three Lethal options in Multiplayer.

It first appears in "Victor Charlie ", with various charges being planted and then detonated remotely after arriving in the village; while the charges look similar to C4, Woods explicitly refers to them as Semtex. In "WMD", Hudson plants a remote charge on the power boxes of a Soviet installation to destroy them; this charge is identical in appearance to the Semtex used in multiplayer, but without the blinking light or beeping sounds.

2000. Semtex takes 0.6 seconds to prepare with a two second fuse. The damage for Semtex is 15 direct damage on stick with 200 damage, and a 4.4 meter lethal blast radius. It seems to be similar to its Call of Duty: Modern Warfare 2 counterpart. A friendly Semtex will have a green blinking light instead of all Semtex blinking red like in Call of Duty: Modern Warfare 2. It retains the ability to stick to enemies, teammates, and various objects. It cannot be "cooked" like a regular grenade. The Semtex has a lower kill radius than its fragmentation grenade counterpart.

Many players use this grenade instead of the Fragmentation grenade because it always kills an enemy it sticks to, unlike a frag, which will bounce off. However, Semtex does not work as well in attacking a second floor of a building, where an experienced frag user could cook and throw a grenade from in front of the entrance of the building and it could enter room from the window and kill any enemies by the window instantly, whereas they would have some time to run from a Semtex and could get out of the range in time.

Semtex appear in the Zombie maps Call of the Dead, Shangri-La and Moon. Semtex replaces default Frag Grenades, and are significantly more powerful. Upon replenishing Semtex grenades off the wall, it will only cost the player 130 points, despite still displaying the original 250 cost. It is unknown if this is intentional or a glitch (Confirmed on Xbox 360, PS3, & PC). An interesting thing to note is that the grenades in Zombies get an increase of damage every round, but unfortunately they stop being a one hit kill past round 4. 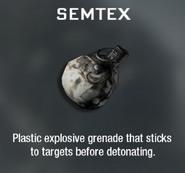 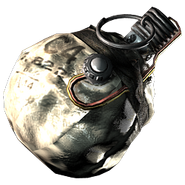 Render of the Semtex

The Semtex about to be thrown in Black Ops multiplayer 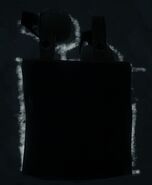 The Semtex Grenade Bags found in Call of the Dead

The "Stuck!" icon in Black Ops shown when stuck by a Semtex

A Semtex being thrown.

Semtex in the iOS version

Semtex is seen in the mission Fatal Extraction where it sticks to anything it touches, much like the multiplayer variant.

Semtex's beeping noise is almost completely gone in third person, players being able to hear it only when priming the grenade, the player throwing it, and in killcams.

A Delta Force soldier throwing the Semtex at the Spetnaz soldier. 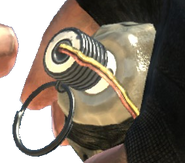 A Semtex being thrown.

"Grenade that sticks to surfaces before detonating"
— Create-a-Class Description.

Semtex returns in Call of Duty: Black Ops II. It is unlocked for selection in the campaign's custom loadout when the mission Time and Fate is completed.

In the Strike Force missions, Semtex grenades are thrown with the XM31 Grenade device, whereas in the remainder of the game they are thrown normally.

The Semtex returns in Zombies in the Town and TranZit submaps of the Green Run map, Die Rise, Nuketown Zombies and Origins. It can be bought off the wall for 250 points, and replaces the grenades players start with. It loses its effectiveness pretty early in the game, losing killing ability sometime after round 10. Until round 10, it has the same killing potential as normal grenades. Due to its relatively low use, it is not recommended to make crawlers. 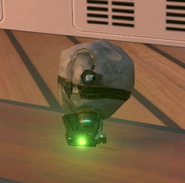 The Semtex in Black Ops II

"Sticky grenade that can stick to anything. It has a set timer and cannot be cooked"
— In-game description.

The Semtex returns in Call of Duty: Black Ops: Declassified.

The Semtex appears in Call of Duty Online.

"Timed explosive device that starts its countdown on release. Sticks to any surface"
— Description.

The Semtex appears as a lethal equipment in Call of Duty: Ghosts. It functions similarly as in previous games, being able to stick to surfaces and players. The Semtex now appears cylindrical rather than spherical. Semtex rounds can also be fired from the MK32 launcher.

The Semtex is part of Logan's starting loadout in the mission "The Ghost Killer".

Semtex appears in Extinction, in Point of Contact, Nightfall, Mayday and Awakening. It can be received in all of the maps from the Team Explosives crates and Random Supplies crates, along with from the dead soldier at the beginning of Nightfall and from Search Piles. They are helpful for killing large amounts of Cryptids trying to attack the Laser Drill. However, Bouncing Betties or Claymores may work better because the player doesn't have to watch the hive (or obelisk in Awakening) and throw it when the Cryptids attack; the player can just place one of them near the hive (or obelisk), then they will detonate on their own.

They also appear in Chaos Mode. All players start with five of them.

They appear in multiplayer, and cost 6 Squad Points. Compared to the M67 Grenades, they could be a better or worse choice depending on the situation. Pairing them with Thermobaric Grenades and the Extra Tactical perk is a good idea because it prepares you for situations where an enemy is too far away to reach with the Semtex, so you can throw two Thermobaric Grenades, possibly killing them.

The Semtex being thrown by Soap.

The Semtex returns in Call of Duty: Advanced Warfare. They are unlocked at level 11. They behave much like Frag Grenades except that they will stick on whatever surface they hit, without bouncing back, as well as having a shorter detonation timer.

The Semtex is unlocked at round 8 in Exo Survival; it can be bought from the Weapon Upgrade armory in the Exo Launcher section for one upgrade point.

The Semtex returns in Call of Duty: Infinite Warfare. Unlike the majority of its predecessors, it only appears in Zombies mode. It is replaced by the Plasma Grenade in Multiplayer.

The Semtex is available to player when dropped from a Zombie wearing a backpack. They function identically from their predecessors, sticking to surfaces and Zombies and exploding. However, the fuse time of the Semtex is shorter than its predecessors.

This grenade returns in Call of Duty: Mobile under the name "Sticky Grenade", despite the existence of a similar grenade with the same name in other Call of Duty games.

The Semtex returns in Call of Duty: Modern Warfare.

In the campaign, Semtex grenades are rarely used. In The Embassy, when the player gets to the mortar house and infiltrates it, an Al-Qatala fighter hiding in a room will throw a Semtex grenade. The player can easily identify it as Semtex instead of a frag grenade due to the distinct beeping. If the player isn't careful, however, the fighter can actually throw and stick the Semtex grenade onto the player and kill them.

"Grenade that sticks to surfaces before detonating."
— In-game description.