Call of Duty Wiki
Register
Don't have an account?
Sign In
Advertisement
in: Call of Duty: Advanced Warfare Factions

For other uses, see Sentinel.

Sentinel Task Force is a Tier One international coalition of Special Forces operatives formed by the United States of America in response to the attacks from the KVA. They appear in the campaign and the Exo Zombies mode of Call of Duty: Advanced Warfare. After the April 28, 2055 Terrorist Attacks and subsequent rise of the Atlas Corporation, they shift their focus to observation and investigation due to suspicions regarding the PMC.

Sometime after the KVA launched a worldwide attack on nuclear power stations, the task force was created. They quickly shifted their focus from the KVA to the Atlas Corporation following their rise to power. A group of Sentinel operatives led by Cormack assisted Jack Mitchell and Ilona after they discovered Irons' own corruption, causing their subsequent defection from Atlas.

After infiltrating Irons' personal estate in Bangkok, Thailand, they uncover Atlas developing a W.M.D. code named "Manticore." Sentinel places a tracking device on an aircraft about to leave Irons' estate and tracks it to Antarctica, where they take the aircraft down and engage Atlas forces. After suffering heavy casualties, they manage to steal a sample and escape. After saving part of the U.S. Third Fleet during Atlas' preemptive strike against the United States, the task force is mostly destroyed during the assault on New Baghdad, having many operatives captured or killed due to the sudden deployment of the Manticore virus. After escaping an Atlas prison camp, while Cormack succumbs to his wounds from Irons, Mitchell, Ilona, and Gideon mount a final attack on the Atlas HQ in New Baghdad to stop a dangerous Manticore launch and find and kill Irons.

In Exo Zombies, Sentinel appears in the maps Infection, Carrier and Descent. In Infection, they are seen in the ending cutscene, where Lennox and some of his troops rescue Oz, Decker, Lilith and Kahn by holding off the zombies in a Razorback VTOL. They then come out of their VTOL and confront the group, holding them at gunpoint. Lennox then executes Oz and orders his men to load the body onto the VTOL. In Carrier and Descent, Lennox replaces Oz as one of the playable characters, and Sentinel reinforcements can be called in to help the player(s) fight once they obtain them from an Orbital Care Package.

A Sentinal Task Force member was added in Season 8 of Call of Duty: Mobile. It was part of the Spectum Redux draw.

The patch seen in the Advanced Warfare Pack.

Lennox, a member of the Sentinel Task Force during the Exo Zombies Timeline. 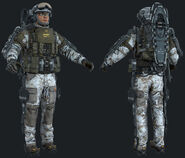 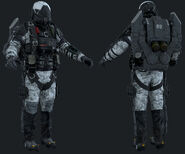 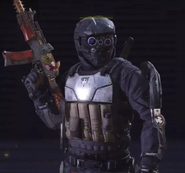 The Sentinel Recon as he appears in Call of Duty: Mobile.
Community content is available under CC-BY-SA unless otherwise noted.
Advertisement