The Sentry Gun is an unmanned weapon capable of autonomously acquiring and firing upon enemy targets through thermal detection. It, as well as the UAV and Predator, is indicative of the increasing role of unmanned technology on the battlefield. The Sentry Gun cannot lock on to enemy aircrafts or enemy equipment.

M5 Sentry Guns are seen in Call of Duty: Modern Warfare 2's campaign various times. They first appear in the level "Wolverines!". The Sentry in this level is positioned on top of Nate's Restaurant, where it provides autonomous cover for Sergeant Foley and his team during the recovery of codename "Raptor". Ramirez (the player's character) can reposition the sentry gun as they wish, which can be quite useful. An enemy sentry gun is seen in "Exodus", so this may be a clue that the Ultranationalists have captured and learned to use a sentry gun. Parts of a sentry gun can be found throughout Makarov's safe house in the level "Loose Ends". Sentry guns can also be found during the level "Endgame" on one of the banks during the boat chase before the player goes through the cave.

The Sentry Gun is a multiplayer killstreak reward in Call of Duty: Modern Warfare 2. After achieving a killstreak of 5 (or 4 with the Hardline perk), a player may call in a helicopter that will airdrop a package (similar to the Care Package killstreak) containing the Sentry Gun. After acquiring the package, the player can place the gun in the location of his/her choice. It can detect enemies at a moderate distance, with its cone of fire centered on where its user positions it. The turret can be picked up and moved; the turret is disabled while held, and the player is unable to use weapons or other equipment. It must be placed before anything else is done. Also, if the player is killed while holding it, it is dropped wherever the player was killed. However, if the sentry gun was being held in an illegal location (indicated by the outline of the sentry gun turning red), and the player is killed, the player loses the sentry gun. If not destroyed, the turret will stop functioning after 90 seconds, appearing to spontaneously short-circuit.

Any players with the Cold-Blooded perk will not be targeted by the turret (though they are still vulnerable to shots fired at other targets). The sentry gun can be disabled with a single melee hit or by gunfire. A Flashbang or Stun Grenade will disable the Sentry Gun for a few seconds, leaving it vulnerable to be knifed. It can also be avoided by moving around its flank, outside of its firing arc. A riot shield user can approach the sentry gun and knock it down with the shield bump, or let the gun destroy itself with ricochet hits. A certain number of destroyed sentry guns will remain on the map and will only vanish when more sentry guns are placed. These destroyed guns form a visual distraction, both because players will approach them cautiously as it's hard to tell if a gun is active or disabled and because they are so bulky, allowing players to hide behind them. They can, however, be fired and walked through. The EMP disables the sentry gun permanently.

Sentry guns have 1000 health points and no damage multipliers. Melees destroy them instantly, explosives do 7x their base damage to them. (so if an AT4-HS does 160 base damage, it will do 1120 damage with a direct hit to a sentry gun). Bullet damage is the same as normal.

The Sentry Gun is a killstreak in Call of Duty: Black Ops. It requires 6 Kills, unlike 5 in Call of Duty: Modern Warfare 2. It still is required to airdrop it in. The Sentry Gun crate can no longer be changed using the Hardline Pro ability due to a patch. Enemy players using Hacker Pro can turn the player's Sentry Guns against them if they can get close enough. Players using Ghost Pro will not be targeted by the Sentry Gun, although they are still vulnerable to shots fired at other targets.

Users of this killstreak should be aware of knifers, as turrets are vulnerable to 1-hit knife kills despite their excellent protection against bullets. Concussions and flashbangs will also stun sentry guns for a short period of time, although they will resume firing shortly if not destroyed immediately. 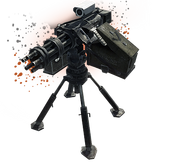 Sentry Gun seen on Call of Duty Elite website.
Add a photo to this gallery

The Sentry Gun is a 5 point Strike Chain reward in the Assault Strike Package in Call of Duty: Modern Warfare 3. It works exactly the same as in Modern Warfare 2, and can be acquired from Care Packages (including those from an Osprey). They have a much faster acquisition rate and range than in Survival Mode. A Sentry Gun will last for 90 seconds before self-destructing. A player using Blind Eye will not be targeted by the turret, although they are still vulnerable to shots fired at other targets. Flashbangs and stun grenades can disable them for a period of time, allowing players to safely bypass the sentry. It can be destroyed with a single knife attack. With Blind Eye Pro, bullets can easily bring down a Sentry Gun.

The Sentry Gun is best suited to protecting objectives such as Domination positions or CTF flags. It can take the place of a stationary protector for objectives while everyone else on the team is playing the game. Placing them in places where enemies cannot approach it without being exposed makes it deadly to medium-to-long ranges.

Sentry Guns make an appearance in Call of Duty: Modern Warfare 3 Special Ops. They appear in the equipment armory in Survival Mode. They also appear in Mission Mode, in the missions Firewall and Fatal Extraction. The sentry guns in Fatal Extraction reward the player with 100 XP upon destruction. Unlike its multiplayer variant, the Sentry Gun needs time to spin up, and always fires in bursts. They also appear in Special Ops Chaos, obtained from friendly care packages.

In Survival Mode, the Sentry Gun is fairly effective against enemy Helicopters due to the velocity of the bullets which can even engage them at long range easily compared to its counterpart. However, it is not recommened to use it against enemy's helicopter or even place it at a open area as enemy helicopters will destroy it within a matter of seconds. It is best suited for medium-to-long ranges. They look identical to its Call of Duty: Modern Warfare 2 counterpart. 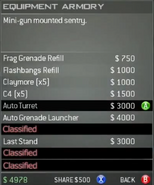 Buying the Sentry Gun in Survival Mode.
Add a photo to this gallery

Sentry guns are present in Campaign missions, used by both allies and enemies. In the Strike Force mission FOB Spectre, two Sentry Guns are given to defend the objectives (a third is given if Objective D is to be protected). These Sentry Guns can be remote controlled just like the multiplayer version. Unlike in multiplayer, the Sentry Guns in the campaign have ability to turn and fire in a full 360 degree circle, rather than the 180 degree arc that Sentry Guns are restricted to in multiplayer, and are only stunned by EMP Grenades.

The Sentry Gun returns in Call of Duty: Black Ops II's multiplayer and requires a scorestreak of 800. It is possible to control the Sentry Gun by remote control, similar to the Remote Sentry. However, it will also seek and fire upon targets without the player's intervention. Unlike previous games, it does not have to be airdropped beforehand to deploy it, it will not be temporarily disabled by concussions or flashbangs, and it cannot be damaged by knife attacks.

An effective tactic with the sentry gun that one can employ is to deploy it on the edges and corners of a map in a wide, open space. From this position, the sentry can usually effectively lock down that area of the map and score many kills. Placed well, it can be difficult to shoot at and all but nearly impossible to be hacked by the Black Hat. From one of these positions, its only real vulnerability will be from EMP Grenades.

The Sentry Gun is now known as the Turret, is found as a buildable item in TranZit that fires upon zombies and the Avogadro. The Turret can be built at the Farm workbench with a lawnmower, an unusable RPD, and an ammo box. When built, the Turret can be placed and it will automatically target enemies in its 180 degree arc, however it will not fire. It has to be powered by a nearby Turbine to fire.

The Turret has a high damage output and has unlimited ammunition. It's most effective when placed in wide sightlines which enables it to eliminate medium hordes of zombies. However, the slow targeting system can be ineffective with large groups and the Turret will eventually be destroyed by zombies. Using a Turbine to power the Turret can be detrimental if the player is trying to utilize it for another purpose, like accessing doors or powering a different buidable.

The Sentry Gun returns to Call of Duty: Ghosts as a 7-point Pointstreak. It also appears in Extinction mode.

The Sentry Gun appears in Extinction as a strike package.

The Sentry Gun icon when it was just a 6-pointstreak 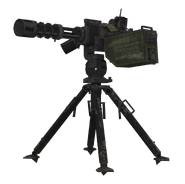 The model with the Sentry Gun. 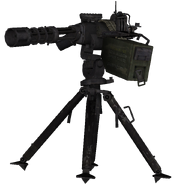 A Sentry Gun in "Museum".
Add a photo to this gallery 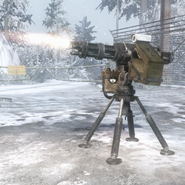 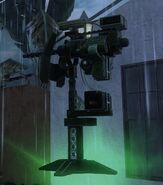 The Sentry Gun in "Dead Ops Arcade".
Add a photo to this gallery

A deployed Sentry Gun in Call of Duty: Modern Warfare 3.

An upclose look at the Sentry Gun. 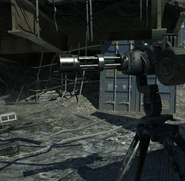 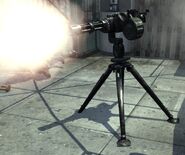 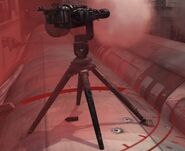 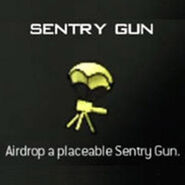 The place holder icon for the Sentry Gun in Modern Warfare 3.
Add a photo to this gallery

Multiplayer Heads-up display.
Add a photo to this gallery

Retrieved from "https://callofduty.fandom.com/wiki/Sentry_Gun?oldid=2035966"
Community content is available under CC-BY-SA unless otherwise noted.