For the Ultranationalist in Call of Duty 4: Modern Warfare, see Sergey.

The Monster of Magadan

"Sergei mugged Dragovich in front of their own people. For his insolence, Dragovich cut out his tongue with a rusted sickle."
— An unused quote explaining Sergei's lack of dialogue.

Sergei was a prisoner of the Vorkuta gulag. Nicknamed the "Monster of Magadan", he possessed brute strength, tackling two guards at once and killing them both with his bare hands, killing another guard with a pickaxe uppercut, helping Viktor Reznov to push a fully loaded mine cart and body slamming on an armory locker door to crack it open. He also has the hulking build to fit the name; apart from that, little is known of him.

Sergei showed his disloyalty toward Nikita Dragovich in front to his fellow inmates. For his insolence, Dragovich uses a rusted sickle to cut off Sergei's tongue.

Sergei was seen in the mission "Vorkuta", as part of the band of prisoners who took part in the uprising. He appeared on the way to the elevator, pushed the coal cart with Reznov, and disappeared after he opens the arms locker. He reappeared before the gate to main armory. He used his sheer strength to hold the shutter open for Mason, Reznov and the other prisoners. However, just as Mason was able to get through, Sergei was shot by one of the guards, resulting in gate coming down on top of him, killing him. 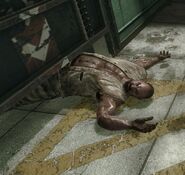 Sergei holding the doors in "Vorkuta"