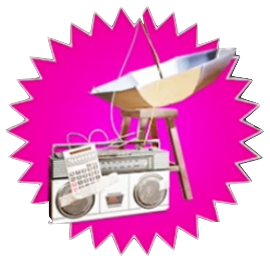 The Seti-Com is a buildable device featured in the Call of Duty: Infinite Warfare Zombies map Zombies in Spaceland. It is part of the map's main easter egg Sooooul Key and is required for the Sticker Collector achievement. In the easter egg, it is used three times in order to help summon the UFO that is stuck in the side of the Polar Peak mountain.

The Seti-Com is constructed from three parts: a calculator, an umbrella and a boom box. Each part can be found separately in each area of the map. The locations for the parts are as followed:

Once the three parts have been collected, the player can bring the parts to David Hasselhoff, who will then construct the Seti-Com and give it to the players.

Once fully constructed, the Seti-Com must be place in a total of three different locations around the map. The possible locations are: