"Mars Aeternum"
"Death is no Disgrace"

"Make no mistake, we will rip you from the history books. Every last trace of you gone! You will know loss. We will be the architects of your pain, we will build monuments to your destruction. The whole world will bear witness to this, our ascension. We will blot out your skies, we will bury you in darkness. Know this and know us. We are your enemy. We are the Settlement Defense Front."
— Caleb Thies

The Settlement Defense Front (SDF), also referred to as SetDef or simply the Front is a militaristic fascist state and terrorist organization that seceded from the Earth's influence during the Secession Wars thirty years before the events of Call of Duty: Infinite Warfare. They are the main antagonist faction and fight against the United Nations Space Alliance and its military arm, the Solar Alliance Treaty Organization.

SetDef is composed primarily of radical off-world insurgents who seek total control over the solar system. They see themselves as the true inheritors of the solar system and believe their way of life to be "stronger, more pure," than the people of Earth.

In SetDef's mind, living off-world has made them more worthy of ruling the solar system, while those who reside on Earth are weak "fat cats," living off the bounty of the off-world colonies. In other words, they believe in an extreme form of Social Darwinism.

They value functionality over style, an attitude reflected in everything from their ships to their weapons and armor, which is modular, with everything designed to protect them from the harshness of space. They have re-purposed service robots into military roles, adding to their legions of troops. For SetDef, a true victory would mean the utter cessation of all influence from Earth. They are willing to kill civilians, soldiers, and anyone who gets in their way.

It seems that the Front uses English as its main language and means of communication.

SDF Territories include, but are not limited to:

The origins of the Settlement Defense Front lie in the 'gold rush' period of planetary colonization when colonists first began leaving Earth. The Front was first created as a means of enforcing martial law on off-world colonies. At some point they became radicalized and went rogue, instigating a rebellion against the Earth-led Government of Mars.

Thirty years before the events of Infinite Warfare, SetDef initiated the "Secession Wars" against Earth's authority, the conflict spread throughout the solar system resulting in more planets being captured by the Front, peace was later reached after the signing of the "Charon accords" establishing the Settlement Defense Front as an independent fascist state separate from the Earth and allowing Setdef control over Mars and other territories. After losing Mars to the Front, the Earth created the United Nations Space Alliance.

18 hours before their attack on Geneva, SetDef launched an attack on a SATO weapons facility on Jupiter's moon, Europa. Although dealt heavy casualties by a SCAR "clean up crew", the mission was a success as the prototype F-SpAr cannon stored in the facility was destroyed leaving the Earth without a weapon powerful enough to destroy the SetDef fleet. They also retrieved data of Earth's planetary defense system, called AATIS, and initiated operation RIAH.

During the annual Fleet Week Parade held in Geneva, the SDF launched their attack. A sleeper-cell agent hijacked AATIS destroying the majority of SATO's fleet in moments. This was in conjunction with a ground assault launched on the city, seeking to take out the world's leaders and other attendees. While the initial attack was repelled after chasing the SDF fleet into orbit, the Olympus Mons "dropped" into Earth's orbit, dealing significant damage to the SATO fleet, resulting in only two ships surviving, the Retribution and Tigris.

After the Geneva incident, the Retribution and the Tigris are charged with the mission to engage and sabotage SDF's military operations to buy Earth more time to rebuild the fleet. Despite high casualties in infantry regime; the death of Captain Reyes, Captain Farran, Staff Sergeant Omar, Private Kashima, Petty Officer Ethan as well as other officers, along with the destruction of both the Retribution and the Tigris, the operation was a success, with the destruction of SDF's main shipyard in Mars; SDF's main fueling station, the Olympus Mons supercarrier; at least 6 SDF carriers; multiple SDF Skelters and Destroyers; extensive loss in infantry force and armored vehicles as well as the deaths of the entire SDF command structure.

Due to the results, the SDF has been weakened to the point where they are unable to mount any further attacks on Earth.

The SDF is ruled by a totalitarian government whose influence and rule extend, but is not limited to, Mars (the capital), Saturn, Neptune, Eris, and several other Jovian moons. Their society is deeply militaristic and heavily authoritarian and social status is based largely on individual citizens' loyalties to the regime. The SDF is also known to have a secret police organization known as Intracore.

SDF society is also heavily influenced by state-run propaganda, as the state-sponsored propaganda center, the "Veritas", controls much of the spread of information within SDF territories, going so far as to block out any UNSA transmissions to SDF space. Additionally, items that originate from Earth (except for weapons) are in most cases considered contraband in SDF territories and are illegal to be possessed. Gun ownership is mandatory within SDF territory. The SDF also maintains forced labor camps to gather more resources to fight the UNSA. The reason for using humans as the labour rather than robots or machines (which SetDef are shown to have an abundance of) could mean that it is meant as a punishment handed down for crimes against the regime. The largest camp is rumoured to be on Titan.

The Settlement Defense Front is deeply militaristic, with its highest ranking military officers constituting the SDF High Council. The Front requires all of its male citizens to attend 15 years of military service beginning at age 12. Because of this, the Front has 900% more soldiers, per capita, than the UNSA's volunteer-based military and holds several fleets powerful enough to challenge it. Its military is commanded by the SDF High Command. In terms of technology, the SDF is at an equal technological level than the SATO as seen by the operating F-SpAr cannon on the Olympus Mons. It is unknown however how the Front managed to have an operational cannon while the UNSA only had one in a prototype state.

Contrary to the UNSA, whose military is equally represented by both genders, the Front's combat forces are largely male-dominated, as women are barred from serving on the frontlines, save for auxiliary support roles. This is due to population growth programs, as the Front is grossly outnumbered population wise when compared to the UNSA. The Front sees races as equal, assuming their allegiance is to SDF. The Front uses many ranks from the Russian Navy as well as the Royal Air Force while also using Iron Cross-medals similar to the Wehrmacht, suggesting their influence. Many high-ranking officers, such as Salen Kotch himself, are of a very young age, suggesting that promotions are much faster in the SDF military.

The SDF is not above using unconventional warfare like backing pirates who steal UNSA cargo with resources bound for Earth or committing war crimes as their attack on Geneva and the Luna Gateway Port left thousands of civilians dead by mass shootings or summary executions. They also possess chemical weapons of mass destruction, as a SCAR team discovered on the SDF carrier Hellas located in Venus' atmosphere before retrieving samples of it.

The Settlement Defense Front soldiers use energy weapons like the R3K, Volk and Type-2 assault rifles, the R.A.W. and Titan light machine guns and the DCM-8 shotgun as well as captured ballistic weapons like the NV4 and KBAR-32 Assault Rifles and the ERAD and RPR Evo submachine guns. For sidearms, SDF troops employ mostly the EMC and Oni though some soldiers also carry the Hailstorm. The SDF also has access to heavy weapons like the Eraser, the Ballista EM3 and some F-SpAr Torches.

The Front also uses various autonomous tactical drones like C6 (used as combat, security, and working drones) and C8 both deployed from drop pods as well as C12 battle tanks and small Seeker robots. The Front uses Wardens to deploy its soldiers on the battlefields.

The 8th Orbital Fleet is led by Admiral Salen Kotch and Vice-admirals Caleb Thies and Vlad Derhachov. The Front main force consists of dozens of destroyers and A-Jak cutters as support as well as several carriers. Some of the SDF warships are powerful enough to destroy a UNSA destroyer or carrier in a single shot like the Olympus Mons and its F-SpAr cannon or the Cerberus and its two rail guns.

The SDF uses the R-7 Skelter as its primary fighter jet against the UNSA's Jackal while R-16 Skelter is used by SDF aces. A prototype Skelter was stolen by Nick Reyes during Operation Phoenix.

After the events of the Geneva Attacks, and the day on the conflict that followed it, the SDF took heavy losses, with a total of 1 Supercarrier, 2 Carriers, 37 Destroyers, 1 Shipyard and 13 A-Jaks destroyed by the actions of Nick Reyes and his compatriots. This however still leaves them with a navy in the range of 7 total jump-capable warships, compared to the UNSA's complete lack of any warships active, all 21 of them either destroyed or in varying states of disrepair. This leaves the SDF with a considerable advantage in the post-Geneva paradigm, making them effectively the dominant naval power of Solar System.

They're leadership situation is unlikely to have suffered much either, whilst the Front lost a number of officers, there still remain dozens of Admirals and Captains from the other seven fleets to take over.

The SDF appear in Call of Duty: Infinite Warfare multiplayer as one of the two playable factions. They face off against the United Nations Space Alliance in every map.

SetDef soldiers during the attack of Geneva. 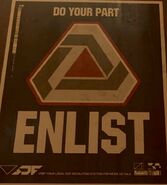 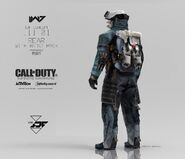 Retrieved from "https://callofduty.fandom.com/wiki/Settlement_Defense_Front?oldid=2475164"
Community content is available under CC-BY-SA unless otherwise noted.