"Severed Ties" is the sixteenth campaign mission of Call of Duty: Ghosts. It involves commanding an M1A2 Abrams tank in order to destroy a Federation Satellite Array, which will allow friendly astronauts to engage enemy forces in space to over take the LOKI Space Station.

The player assumes the role of Badger-Two, the callsign of an M1A2 Abrams tank. Within the cargo bay of a C-17 Globemaster III, another tank is getting prepped. Suddenly, flak causes several crew members to be injured and for the other tank to catch fire. At the same time, their plane becomes damaged. The Globemaster releases Badger-Two, and it lands with other tanks, but their transport crashes. Badger-Two and the other tanks battle X08 Selva Tigres, T-90s and Mi-24 Hinds. A-10s provide air support. Their objective then is to destroy mobile rocket-launchers so Ghosts can land and launch a kinetic rod missile which will then turn around and destroy the Satellite Array. Badger-Two and several other tanks destroy each of the mobile rocket launchers.

The player takes control of Logan Walker. He and his brother Hesh are approaching the control center. After clearing it out, Hesh activates the kinetic rod and coordinates it to strike the ground array. Logan launches the weapon. Radio transmission from a dead enemy soldier confirms that Rorke is boarding a train that is preparing to leave launch control. Hesh and Logan pursue and board the train.

The player's perspective goes back to Badger-Two's. Its objective is to destroy the V75 Mantis Turrets that act as an air-protection mechanism. Badger-Two destroys each of the relays but gets heavily damaged in the process. The remaining commander boards Badger-One and becomes its gunner. Badger-One then leaves the area as the kinetic missile decimates the ground array.

First person view of the Abrams. 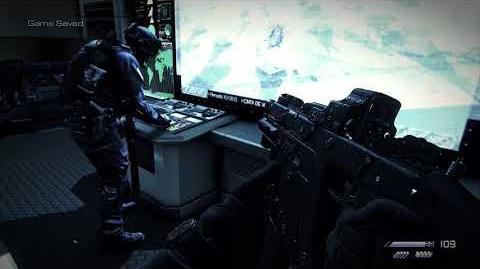