For other uses of a Katana, see Katana.

Shadow Blade is a Ninjatō-style Katana that when activated will force the camera into third person. Whilst active, crouch is replaced by a roll function and enemies within striking distance and line of sight will have a ping placed over their body, attacking with this active will aim the attack towards the pinged target. It can also be aimed with, allowing for the ability to throw the Shadow Blade.

The Camera changes to third person while Shadow Blade is active.

Aiming the Shadow Blade for throwing. 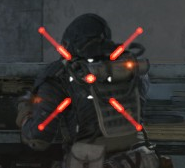 A full shot of the Shadow Blade being held by Spectre.

The Shadow Blade lodged in the floor after being thrown.

"Swifly kill enemies at close range, while also detecting hostiles within the sound of any smoke granade."
— In-game description.

The Shadow Blade returns as an Operator Skill in Call of Duty: Mobile. It was added during the Season 8 The Forge update.

Initially, was called "Katana", but the name and model were changed in Season 9 Conquest update, and it became similar to the Black Ops 4 Shadow Blade.

The Katana model as it was known before the change in Season 9.
Community content is available under CC-BY-SA unless otherwise noted.
Advertisement