"Shadow Company is called in to clean up the uncleanable messes, and take out targets other outfits can't touch. We're a magnet for missions too sensitive to ever get declassified and too messy for those who don't know when to bend the rules of engagement. To put it bluntly, we get the job done."
— Marcus "Lerch" Ortega

Shadow Company is a Tier One private military company and Allegiance sub-faction featured in Call of Duty: Modern Warfare and Call of Duty: Warzone.

Following the collapse of Armistice, the elite Shadow Company PMC was formed, aligning itself, only by name, with the Allegiance. Driven by their own agendas, Shadow Company operates outside the boundaries of the original Armistice, ready to take the war directly to Victor Zakhaev and into Verdansk and deal with terrorist threats directly.[1]

Upon receiving Allegiance intel regarding enemy radio chatter originating from the Verdansk Stadium, a small team of Shadow Company operatives led by Marcus "Lerch" Ortega fly to the stadium, seeking to intercept the potential source of the signal: Victor Zakhaev. Simultaneously on the ground, Rozlin "Roze" Helms uses explosives to blow open the roof of the stadium, allowing Lerch's team to land inside and begin their hunt for Zakhaev.

Despite their efforts, Shadow Company was unable to locate Zakhaev, as it was discovered by Task Force 141 operatives that he had escaped undetected via the underground metro system. Nonetheless, Shadow Company operatives remained in Verdansk to continue the fight against Al-Qatala. 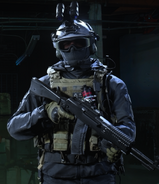 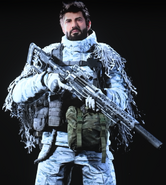 Shane Sparks (formerly)
Add a photo to this gallery

Shadow Company's Rook logo.
Add a photo to this gallery

Retrieved from "https://callofduty.fandom.com/wiki/Shadow_Company_(2019)?oldid=2567451"
Community content is available under CC-BY-SA unless otherwise noted.