"Shadow Company is a different breed. No more vodka-drunk Ultranationalists. They're trained like we are."
— John "Soap" MacTavish

Shadow Company is an elite unit of private military contractors under the direct command of General Shepherd that appears as an enemy faction at the end of Call of Duty: Modern Warfare 2's campaign, and in one Special Ops mission, "Snatch & Grab". All members of the unit are extremely loyal to General Shepherd to the point where they assisted him in his plans to betray Task Force 141. The Shadow Company return as a multiplayer faction in Call of Duty Online.

Shadow Company makes its first appearance in Loose Ends, in the Caucasus Mountains near the Georgian-Russian border, securing the landing zone that Roach and Ghost must get to, who have downloaded a DSM containing vital intelligence on Makarov. They are briefly shown as allies, until their leader, Shepherd, betrays Roach and Ghost and kills them. A few soldiers help Shepherd get rid of the bodies by pouring gasoline on them and lighting it on fire with Shepherd's cigar.

Their next appearance is in The Enemy of My Enemy, at the U.S. Vehicle Disposal Yard 437 in Eastern Afghanistan, fighting Makarov's Inner Circle. They attempt to kill Soap and Price, but fail. The outcome of their battle with the Russians is not shown.

Their last appearances are in Just Like Old Times and Endgame, when Soap and Price infiltrate Site Hotel Bravo, their command base, coming for Shepherd's life. They are at first unaware of Soap and Price's presence until their patrols gradually go missing due to the infiltration.

They once again fail to stop Soap and Price, leading to Shepherd attempting to escape on a Zodiac. Price, while successfully preventing the rogue commander's escape by downing his helicopter, goes over a waterfall with Soap. A long and desperate fistfight ensues between a weary Captain Price and General Shepherd. It only ends when Soap, stabbed by Shepherd and heavily wounded, removes the knife from his injury and expertly throws it through Shepherd's left eye, killing him and leaving the future of Shadow Company in question. The group is not mentioned through the remainder of the Modern Warfare storyline.

However, Shepherd holds no regard for their lives and considers them all expendable. During Just Like Old Times, Shepherd calls in a danger-close artillery strike on his own base, killing an unknown number of his own men in a failed attempt to also kill Soap and Price.

Shadow Company soldiers are heavily armed, highly trained and extremely dangerous. Their choice of weapons consists of modern weapons. Their weapons of choice are similar to Task Force 141 and the Army Rangers. Their arsenal includes:

Shadow Company has a variety of vehicles, most of them used by the U.S. military. These include:

Soldiers of this unit are distinguished by their black combat uniforms and tan SDS BAE releasable body armor vests, with both a U.S. flag and a spade patch symbol, and black balaclavas, as well as tactical goggles or night vision goggles attached to their helmets, (the only difference is the color); they also appear to have other various equipment such as extra ammunition magazines, flares, grenades, etc. The Shadow Company soldiers wear Pro-Tec Classic helmets.

(Note, any quotes in italic are from General Shepherd)

If the soldier is holding a rifle, the character model has two rifle ammo pouches and three extra pistol magazines.

If the soldier is using a shotgun, the character model has many extra shotgun shells.

If the soldier is using an LMG or Launcher, the character model has three large ammo packs, and two extra fragmentation grenades.

Shadow Company logo on the crates or container.
Add a photo to this gallery

Shadow Company makes a re-appearance in Call of Duty: Online as a mercenary faction pitted against Task Force 141 in all PvP game modes.

Instead of wearing all black, the soldiers have white tops and black pants. They are commanded by Winston Harker instead of General Shepherd.

Shadow Company in a Little Bird, in mission "Loose Ends"

A Shadow Company soldier mans a mini-gun in an armored SUV.

A wounded Shadow Company member crawls away from the wreckage caused by an artillery strike at Site Hotel Bravo.

Shadow Company member with an AA-12.

Shadow Company member with an AT4.

Shadow Company member with a SPAS-12.

A group of Shadow Company soldiers (Butcher Five) in the command room after Price and Soap breach.

A pair of Shadow Company soldiers playing chess. (Note that some of the chess pieces actually clip through the AA-12)

Shadow Company "downed" pave low pilot with G18 (note: this pilot only appears in the Campaign Remastered version of the final mission Endgame)

shadow company soldier (lmg loadout) crouching with an acr; note this type has an lmg loadout but is using an acr (also appears in enemy of my enemy) (mw2 remastered)

same sniper but with his sidearm drawn; note the sniper uses the smg loadout and not its own most likely because only 1-2 spawn in one mission (enemy of my enemy) (mw2 remastered))

another angle of the shadow company riot shielder (mw2 remastered) 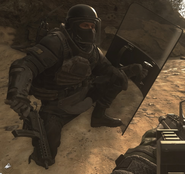 another view (MW2R)
Add a photo to this gallery

Retrieved from "https://callofduty.fandom.com/wiki/Shadow_Company_(Original)?oldid=2523831"
Community content is available under CC-BY-SA unless otherwise noted.