For the map, see Shadows of Evil.

"Call of Duty: Black Ops 3 invades Fright Fest with a terrifying experience sure to awaken the dead! Based on the game’s new Zombies map, “Shadows of Evil,” riders will explore the 1940s Film Noir-inspired world of Morg City, where scary encounters are certain and escape is far from guaranteed."
— Description

Shadows of Evil The Ride[1] was an attraction at the Los Angeles Six Flags Fright Fest. It was based on the Zombies map Shadows of Evil from Call of Duty: Black Ops III. It was in the Apocalypse area of the park. Those who preordered Black Ops III received a $10 admission discount.

Call of Duty has a released a 360-degree video showcasing the Shadows of Evil Ride. It contains quotes from the Shadowman, and has the song Snakeskin Boots in the background. The waiting line for the ride has iconic locations from Shadows of Evil: The Burlequse, The Boxing Gym and Nero's lair. 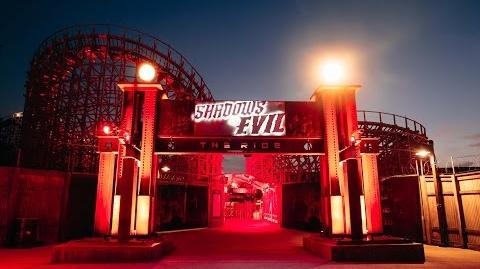 Retrieved from "https://callofduty.fandom.com/wiki/Shadows_of_Evil_The_Ride?oldid=2562822"
Community content is available under CC-BY-SA unless otherwise noted.