Survive for as long as possible against limitless waves of the Undead
Find his grave and dig it up (Call of Duty: Zombies)
Defeat the Abomination (Call of Duty: Mobile)
Restore Saraxis' memories (Vanguard)

"The "Swamp Of Death" holds the key to defeating Von List and his undead Reich. Build the wonder weapon, find the Relic and expose the hidden horror of Kortifex's past."
— Mission Briefing in Vanguard

The map was first released in World at War on June 11th, 2009 for PlayStation 3 and Xbox 360 as part of the Map Pack 2 and on July 17th for PC for free through the v1.5 update. Shi No Numa was released in Zombies on June 2, 2010 for $4.99. The map was added in Black Ops with the Rezurrection map pack, and in Black Ops III with the Zombies Chronicles map pack.

Originally a small section of Der Anfang in Vanguard, Shi No Numa was added as a round-based map on June 22nd, 2022 as part of the Season Four content for the game.

Shi No Numa takes place in a swamp surrounded by a dense jungle, with four huts connected to a central building with by piers and also a Zipline. A meteor of Element 115 can also be seen outside of the playable area.

Within the Aether Story, the map is the location of the Rising Sun Facility where Division 9 and Group 935 worked together to development weapons and experiment on the undead using the Element 115 found in the area.

Within the Dark Aether Saga, the map became a dig site for Die Wahrheit to uncover insights about the Elder Gods working against the SS unit.

In Call of Duty: World at War, Shi No Numa introduces new specific characters with their own personality: Edward Richtofen, Nikolai Belinksi, "Tank" Dempsey, and Takeo Masaki. Each character will randomly be assigned to each player at the start of a game. Those characters will remain playable for most of the maps in Zombies until Tag der Toten.

The Zombies are now wearing Japanese uniforms and can now be seen tearing down the boards instead of lunging at the window. Unlike the players, the Zombies aren't slowed down by the swamp allowing them to outrun the players while in the water. When playing Solo, only 24 Zombies will spawn at any given round, this isn't the case with multiple players.

The map also introuces special rounds with a new enemy, the Hellhounds. When a special round starts, the map fogs up and thunder is heard to indicate the arrival of the Hellhounds. Once they have spawned into the map, the zombified dogs will chase the players, and will often explode upon being killed. When all the Hellhounds are killed, the special round ends and the players are rewarded with a Max Ammo Power-Up either with the last Hellhound killed or the next Zombie killed. A new special round will appear every 4 or 5 rounds.

A new Wonder Weapon is also introduced, the Wunderwaffe DG-2. It fires a bolt of chain lightning that can kill up to 10 enemies at a time. However, only one player can use the weapon at a time after obtaining it from the Mystery Box. If the player is too close to a Zombie when they shoot it, the player will be electroducted displaying an effect much like running through an electrical trap, but with less damage.

The Mystery Box behavior is also different compared to the previous maps, once the box disappears it will randomly re-appear at one of its spots instead of using a cycling pattern. As such, a beam of light can be seen in the sky to indicate the location of the Mystery Box. The map also adds two weapons, the Arisaka and Type 100.

Unlike Verrückt, Shi No Numa does not require to have the power to be turned on to activate the traps or the Perk-a-Cola Machines. When the players open each of the 4 main huts, a Perk-a-Cola Machine will randomly spawn in the hut. Alongside the Electro-Shock Defenses placed at each main hut, a new trap called the Flogger is introduced. The Flogger is a rotating wooden trap with long bars and barbed wire in between them attached to giant logs that are riddled with sharp spikes. While the Electro-Shock Defenses cost 1000 Points, the Flogger only costs 750 Points.

In Call of Duty: Black Ops, Shi No Numa is similar to its World at War version while making small changes with foliage and fog either reduced or added to certain parts of the map.

The Zombies wear slightly different uniforms. While the World at War weapons are kept on the walls, all the weapons in the Mystery Box are replaced with Black Ops weapons. The Monkey Bomb is also available in the Mystery Box.

Unlike in World at War, the total number of Zombies also increases per round when playing on Solo.

The Mule Kick Perk-a-Cola Machine was also added to the starting room on September 27th, 2011.

In Call of Duty Online, a Shi No Numa remake is available called Ghost Swamp for the Cyborg Rising mode.

In Call of Duty: Black Ops III, Shi No Numa was remastered vastly improving the graphics and creating a different color scheme to the map compared to the previous versions.

All the weapons on the map are replaced with Black Ops III weapons (although some World War II weapons return).

The subject matter of this article was removed from the current version of a Call of Duty game.

Shi No Numa was added to Call of Duty: Mobile on November 23rd, 2019 with the addition a the Zombies mode to the game. [1]

The map was available in three modes: Normal Raid, Hardcore Raid and Survival. In Raid modes, the players had to survive until a specific round, either 8 in Normal Raid or 12 in Hardcore Raid, before facing a boss on the final round to win. The boss was either Abomination or Jubokko. In Survival, as always was the classic Zombies Mode, the player will have to survive the infinite amount of rounds. All known features like Wall Buy weapons, Perk-a-Colas, and the Mystery Box is available in the three modes.

While the map retains the same layout at the original version, it also features two new areas. An underground lab based on the lab featured in the map Zetsubou No Shima from Black Ops III; and a fight arena only accessible during the boss fight.

In Call of Duty: Vanguard, Shi No Numa is available as a locale for the map Der Anfang and only features the starting building with the Zipline and the Flogger being unavailable.

With the release of Season Four, on June 22nd, 2022, the map was added as a fully fledged round-based map.

The Starting building is located at the center of the map. Players will spawn in the top floor. The Flogger can be found outside the building and is available for 750 Points, leading to the Fishing Hut. There are also two spots for the Mystery Box. A corpse can be seen hanging from the roof in the starting room.

The Storage Hut is located northwest of the Starting Building. It costs 750 points to reach the hut which features a Perk-a-Cola Machine, a Mystery Box spot and a Wall Buy weapon. An Electro-Shock Defense trap is also available for 1000 points. The hut is the smallest room on the map and has two windows. A radio can be found there and the Element 115 meteor can be seen outside the playable area from the rightmost path to this hut.

The Comm Room is located northeast of the Starting Building. It costs 750 points to reach the hut which features a Perk-a-Cola Machine, a Mystery Box spot and a Wall Buy weapon. An Electro-Shock Defense trap is also available for 1000 points. The hut has two windows. A telephone can be found in the hut which will activate the song The One after interacting with it thrice.

The Doctors Quarters is located southwest of the Starting Building. It costs 750 points to reach the hut which features a Perk-a-Cola Machine, a Mystery Box spot and a Wall Buy weapon. An Electro-Shock Defense trap is also available for 1000 points. The hut has two windows.

The Fishing Hut is located southeast of the Starting Building. It costs 750 points to reach the hut which features a Perk-a-Cola Machine, a Mystery Box spot and a Wall Buy weapon. An Electro-Shock Defense trap is also available for 1000 points. The hut is the largest room on the map and has three windows.

Main article: The One

The song The One can be activated by interacting three times with the telephone in the Comm Room. Before the song is played, the players can heard the message "9-1-1 I know where you're sleeping".

In Call of Duty: Zombies, after opening the entire map, a quote will say "All areas unlocked! Now find the grave!" and the player's knife will be turned into a shovel. The player needs to find a grave marked "Peter" and use the shovel to dig up the Wunderwaffe DG-2.

Hellhounds during a Special Round.

Interior of the Comm Room.

The Zipline from the Starting Building.

The Zipline from the Doctors Quarters. 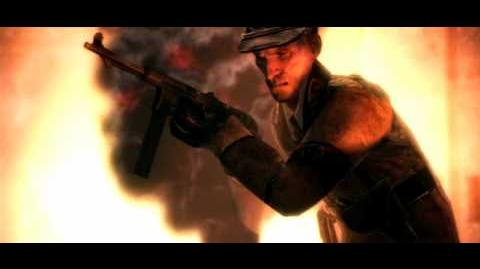 Call of Duty World at War - "The One" (Official HD)
Shi No Numa's music video. 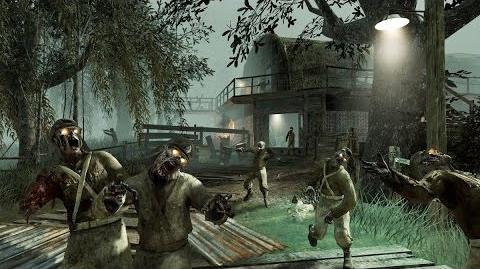 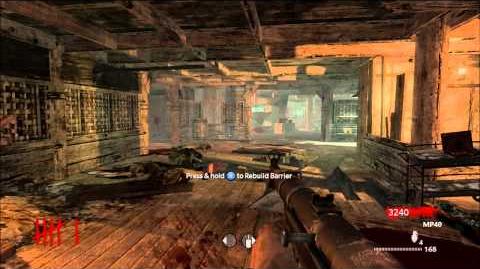