"Press (R2/Right Stick/V) while in the air to perform a devastating ground slam."
— In-game description.

Shockwave is a trait for Merc in Call of Duty: Infinite Warfare that is unlocked at level 21. It allows the player to perform a ground slam that disorients and damages enemies in the slam radius.

If caught in the radius of the slam, the player's vision is slightly blurred and their movements are slowed, similar to the effects of the Jammer Grenade. If the ground slamming player lands on the other player, the victim will be instantly killed.

Shockwave is intensely useful in objective game modes, being utilized for point clearing. Shockwave can also be used to traverse through height oriented areas of the map, or for dodging projectiles and enemy bullets. It is not, however, a tool for every combat situation, due to the height requirement to do actual damage and disorient the enemy.

A player performing the Shockwave. 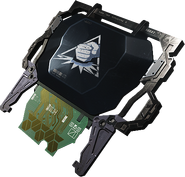 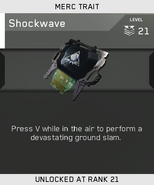 Shockwave being unlocked in multiplayer.
Community content is available under CC-BY-SA unless otherwise noted.
Advertisement