The Shredder is a wonder weapon that appears in the Call of Duty: Infinite Warfare Zombies map, Zombies in Spaceland.

The Shredder, like all quest weapons, is a buildable weapon consisting of 3 components: a souvenir trophy, a battery, and an elemental crystal. All four quest weapons require that you purchase the gold teeth from the Astrocade reward counter for 300 tickets, get a Brute to break the teeth on the alligator trap in the Kepler System section of the map, and replace the broken teeth with the gold teeth to reveal a cabinet which contains all the crystals.

Between the Polar Peak and Kepler System sections of the map is a log flume ride and fountain. As the boat passes by, shoot the back of the boat, dead center at along the central horizontal seam. Head to the colored water fountain above the log flume. The battery will alternate between the four fountains that are shooting straight up. Grab the battery while it is suspended in the water jet.

As the game progresses, zombies will randomly drop three types of souvenir coins, Green Yeti, Blue Space Man, and Red Alien. Place three Red Alien coins in the Souvenir Machine in the Kepler System section of the map, located behind the $1250 barrier into the snack bar section of the area, one at a time. After the third coin is deposited, the souvenir weapon will drop and a toy alien trophy will spawn directly beside the souvenir machine.

After turning on power to all sections of the map and linking all four teleporters, enter the central teleporter into the Pack-a-Punch room. In the left hand corner of the room is a table with four UFOs. Interact with the table to send the UFOs out into the map. These UFOs will begin a flight pattern over 4 different traps: The Disco Trap, Chromosphere, Dragon's Breath, and Blast Off. Head over to the Chromosphere trap in the Kepler System section of the map, at the very back of the area. In a single activation of the trap, kill 20-30 zombies with the trap. This will cause the UFO to change its flight pattern to a larger one around the area. With 300 tickets, purchase an Arcane Core from any reward stand located around the map. Using only the gun the Arcane Core is attached to, reap zombie souls by getting kills near the UFO. Once the requisite number has been reached, the UFO will stop collecting souls and drop a glowing orb. Pick up the glowing orb, which will add the Elemental Upgrade to the player's weapon. Return to the Kepler System section of the map and go over to the giant alligator on the right hand part of the area. Shoot the four doors on the front of the cabinet once the teeth have been destroyed and the golden teeth have been inserted. One of these doors will disappear. Interact with the opening to collect the crystal.

Once the player has collected all three parts, head to the underground maintenance section of the map and interact with the cardboard cutout close to the banshee wall buy. Each piece will need to be added separately. Once all three have been added, the player will be able to pick up the Shredder Quest weapon. The weapon will cause several zombies to stop in their tracks when hit and of that group 1-2 zombies will disintegrate.

When upgraded via Pack-a-Punch Machine after the Alien Fuses have been installed, it becomes the Meat Grinder. 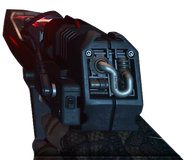 The Shredder in first person 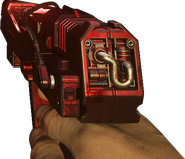 The Meat Grinder in first person
Community content is available under CC-BY-SA unless otherwise noted.
Advertisement