"Sicily 1" is the seventh mission in the Call of Duty: United Offensive campaign. The player fights the Wehrmacht as an SAS soldier in Capo Murro di Porco, Sicily on July 12.

The mission starts off with a debriefing from SAS Command informing of the player's squad of their current mission. Soon after the debriefing the player starts on a boat making its way to a dock. Once the boat docks, the player moves along with his squad to stealthy kill 2 German troopers inside the first building you encounter.

After getting up the mountain Ingram will tell the player to blow the lighthouse charges. Once that is done, the player must stealthy move past the German trucks going to the lighthouse. Soon the player and his squad find a hole in a wall and decide to jump through it, getting inside the base unnoticed.

Soon the player will blow their squad and be asked to destroy the Comms Station in the German base, making sure that the Germans can't call for help. After the destruction of the Comm Station the player goes down to the guns station with Moditch, and Luyties to disarm/destroy the guns. The player also gets important documents relating to German plans once inside the bunker, and goes down the elevator to plant the charges. Once the charges are placed and destroyed they player will go back to surface level with Ingram and the rest of the squad holding off the Germans.

Ingram tells the player to get in the bike with him, and tells the rest of his squad to get into a Kubelwagen. The squad drives out of the base but a incoming German Panzer comes and destroys the Kubelwagen killing Luyties, Moditch, Hoover, and Denny. The mission ends and fades to black after Ingram successfully gets out of the base along with the player. 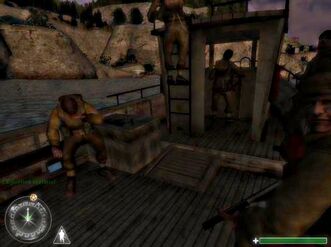 The squad on the boat at the start of the mission. 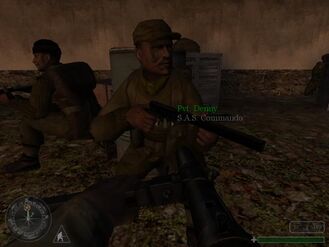 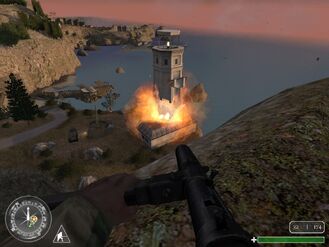 The Lighthouse exploding.
Add a photo to this gallery 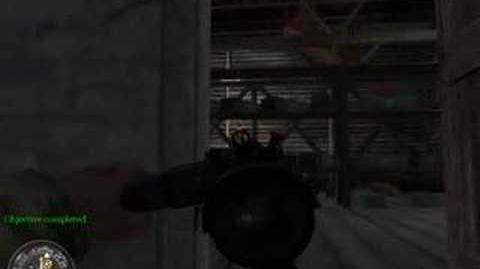 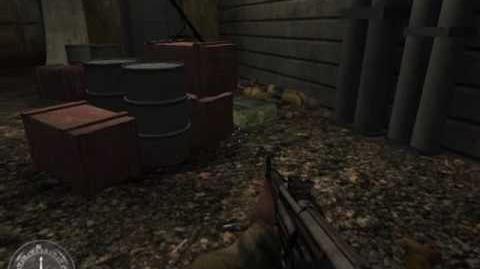