The Sickle appears in Call of Duty: Black Ops, found in the maps Ascension and Call of the Dead. It is the Russian equivalent of the Bowie Knife. It can also be seen on the side of the VC Bookie in the mission "Payback"

It is statistically identical to the Bowie Knife and only differs by aesthetics. Like the Bowie Knife, it costs 3000 points and replaces the player's knife upon purchase. It deals 1000 damage instead of the 150 a regular knife deals, meaning it kills in one melee attack up to and including round 9. Combining it with a Pack-a-Punched Ballistic Knife will increase the damage to 1500 in addition to making melee attacks faster, leading to one-hit-kills up to and including round 13. If the player dies and respawns, the Sickle must be bought again.

The Sickle is an ideal purchase for players who like to stack up many points early on, although its purchase points are relatively far away (and having more doors to open in between), leading many to instead stick to a wall weapon in an area closer to spawn.

The outline of the Sickle. 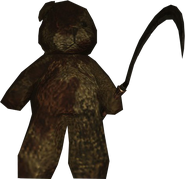 A Teddy Bear holding a Sickle in Ascension.

Reloading a Ballistic Knife with the Sickle.

The Sickle in the iOS version.

The Sickle appears in Call of Duty: Black Ops III in the multiplayer map Fringe, as well as being wielded by Russian Mangler Soldiers in the Zombies map Gorod Krovi.

The Sickle appears in the remastered version of Ascension.

The Sickle was added to Call of Duty: Modern Warfare Remastered in the February 7, 2017‎ update and is designated the Epic quality. It now functions as a standalone melee weapon in multiplayer. The Sickle can be obtained from a Supply Drop or bought with 3,600 Parts. It is a piece of the Kamchatka-12 collection.

When being inspected, the Sickle is twirled around by the player in a stylistic fashion. After killing an enemy with the Sickle, the Sickle becomes coated in blood.

The Sickle in first person

The Sickle covered in blood 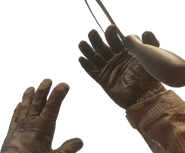 The Sickle being twirled around by the player

The Sickle returns in Call of Duty: Modern Warfare as a blueprint for the Combat Knife. It was featured in the Bundle Ghost: Grim Reaper, added during Season Six content for the game.

The Sickle returns in Call of Duty: Mobile, where its appearance now resembles a scythe. It was added in June 2021 as part of the Season 4: Spurned & Burned update. 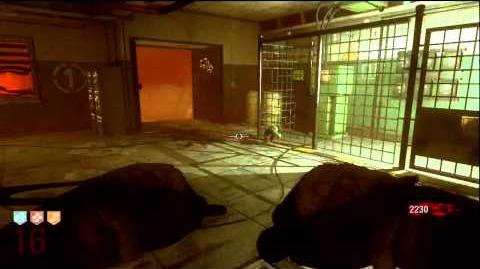 Sickle with the Ballistic Knife Gameplay
Community content is available under CC-BY-SA unless otherwise noted.
Advertisement