"In the shadow of Devil’s Tower, Wyoming, this abandoned motel’s open layout amplifies its creep factor. Blast your way through the clown inn with close-quarters battles or use long-range site-lines from the mining facilities and natural terrain. Use the map-based scorestreak to activate the lights, music, and magic of the clown marquee and rain down a barrage of rainbow smoke-trailed cannonballs."
— Gamestop Description

Sideshow is a multiplayer map featured in Call of Duty: Advanced Warfare, and was released in the Havoc downloadable content pack. It is set at Devil's Tower in Wyoming and pits players in a crazy over the top colorful motel with nightmarish clowns and a manical clown marquee as the maps dynamic feature. Sideshow also appears in Exo Survival.

Visually, the map is stunningly colorful. A lot of visual elements stand out, such as highly detailed decor. The map features scary looking elements such as the human formed develish clown. Not only is the marquee a dynamic feature, it'll be a very memorable location for players to venture in due to its unique design. All offensive playing styles can be used in each area. Tactically and offensively, it features a lot of long lanes, lines of sight, heavy assault points, jump spots and flanking areas. It is divided into four sections, first being the abandoned train set and small building structures with broken down train carts and open interiors to get in buildings though most of the action takes place outside. A small bridge is connected to the streets and motel area. Use it as an advantage for flanking and sneaking enemies. Second is the streets, probably the most hazardous combat area. With wide, open spaces and long lanes of fire, these areas are very suitable for long range weapons, as well as obtaining Longshot medals. Staying in the open is ill advised, as players will be vulnerable for virtually all sides. The third spot is the motel, offering the highest vantage point on the map. If players are equipped with Assault Rifles, they may pick off good kills on the lower buildings by the restrooms and car wash. Use some of the building as either coverage or misdirection. Take caution on both second and third areas because those will be the heaviest sections and deadliest engagements. The fourth section is the rocky railway. It's set outside with a railway and rocky formations that can be used as an alternative pathway and flanking points.

Since almost all sections are dangerously chaotic, gamemodes such as Capture the Flag, Domination and Uplink will be heavily active. In Domination, the C flag is located besides an abandoned train cart near the train set. As an advantage, using the train cart while capturing is a good source of coverage. The A flag is located at the side of a building next to the streets, in front of a small parking lot and leading to the rocky railway. There's less coverage around the area due to the available space it is set on so utilizing the building as either a cover point or defensive position must only be used at one's risk. It is probably the flag that players may capture first. The B Flag is located in the motel area next to a building structure and the maniacal clown marquee. Again, using the building must be utilize at one's risk due to the fact it'll attract enemy players and leaving them exposed to heavy fire. Most of the buildings where the A and B Flag will be offensive/defensive sniper position, one must actively alerted to any cost when venturing the area. 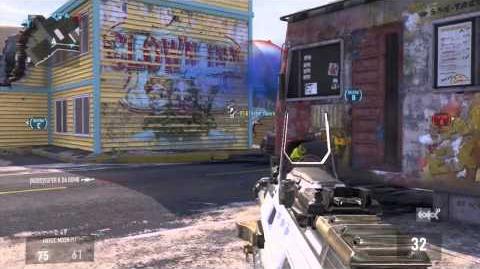