Ghost
The Ghost of Verdansk
Jawbone

Knife, any equipment obtained by the player

"An expert in clandestine tradecraft, sabotage and infiltration. He lives with a redacted past and an undercover present, marked by a concealed appearance to hide his identity and maintain anonymity in the field."
— In-game biography

Lieutenant Simon Riley, also known as Ghost, is a character featured in Call of Duty: Modern Warfare and Call of Duty: Warzone. First mentioned at the end of the campaign, Ghost was released as a SAS operator of the Coalition as part of Season Two's Battle Pass for Modern Warfare.

Born in Manchester, Simon Riley joined the Special Air Service and spent the majority of his career serving numerous short-term deployments and executing covert assignments in classified locations. He became an expert in clandestine tradecraft, focused on sabotage, ambushes, and infiltrations into denied areas and hazardous environments. Ghost concealed his identity under a hallmark skull figured mask to maintain anonymity in the field.[2]

At one point, Ghost worked in the same unit as Mace.[3]

Task Force 141 and War in Verdansk

Price: "There he is... Simon Riley"
Laswell: "There's no picture."
Price: "Never."
— Kate Laswell asking about the photo on Riley's file.

Following the death of General Roman Barkov, Ghost was recruited by Captain John Price in the newly formed Task Force 141 where he became a commanding officer. Following the invasion of Verdansk by Al-Qatala on March 3rd, 2020, Riley was deployed in the city to assist the Armistice initiative against the terrorist organization supplied by Victor Zakhaev. During one of Armistice's operations, Ghost helped the Arm-4 team infiltrating the occupied Verdansk airport to retrieve a nuclear core.

Fall of Armistice and Hunt for Zakhaev

Price: "Can you talk?"
Riley: "I can listen..."
Price: "Zakhaev's plan is working. The Armistice in Verdansk has officially fallen. It's bloody chaos."
Riley: "Tell me something I don't know."
— Price talking to Ghost in the Season 3 cutscene.

When Al-Qatala released toxic gas within Verdansk, Ghost discovered a chaotic situation where the operators of Armistice have turned against themselves and began targeting each other. He soon requested Price to send him reinforcements he could trust. Riley managed to escape the city and was deployed to a classified location where Price informed him that Zakhaev's plan worked, with the Armistice now officially disbanded. Ghost was assisted during this operation by "Alex", who was sent by Price.

In December 2020, Ghost assisted Price in Verdansk to stop Zakhaev from launching the missle attack onto Verdansk. Ghost, along with "Alex", Gaz, Price, Nikolai and Farah Karim communicate with Johnny "Soap" MacTavish and assist him "half a few clicks off of Verdansk's coast".

Ghost appears in Call of Duty: Mobile and was added as part of the Season 12 Going Dark Battle Pass. He is a uniform for the Original Ghost. [4]

Image of Ghost displayed in Arklov Peak prior to his reveal.

Skull displayed in Piccadilly prior to the reveal of Ghost.

Image of Ghost appearing in a Nikto promotional briefing. [5]

Ghost following a player in a lobby during Season Two.

Ghost together with all members of Task Force 141, after Victor Zakhaev death. 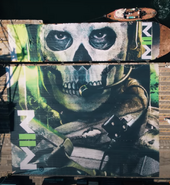 Ghost Art at the Port of Long Beach.